As fans of the “Transformer” franchise know, one of the robots, Bumblebee, is a Camaro, which leads me to wonder whether the 2019 Camaro ZL1 1LE is an Autobot.

First know that the ZL1 variant of the Camaro makes the car track-capable, thanks, in part, to a 650-hp LT4 supercharged 6.2-liter V8, and a light, strong structure that contributes to a curb weight of the coupe, with the standard Tremec six-speed manual, of 3,883 pounds. 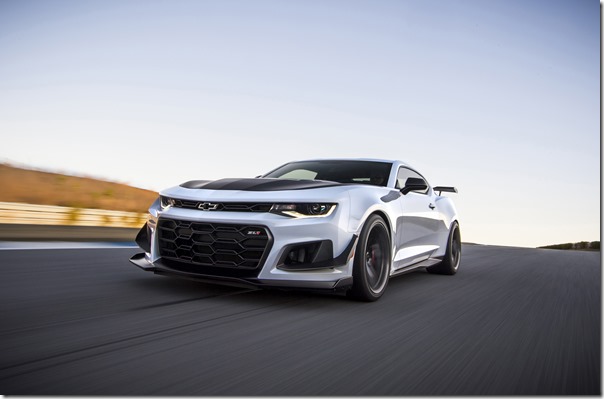 But then that gets amped up with the 1LE package, which adds such things as an aero package that deploys such things as a carbon fiber rear wing; Multimatic DSSV dampers in front and rear; special lightweight forged aluminum wheels that are wrapped with Goodyear Eagle F1 Supercar 3R tires (these are summer tires, so for those of us in the current Polar Vortex. . .dream of warmer days); and things like thinner rear glass that helps reduce curb weight by some 50 pounds. (Less mass to move means a faster car, of course.)

OK. But what about the Autobot aspect?

Well, the Camaro ZL1 1LE is available with a 10-speed automatic transmission. This 10-speed is specifically tuned for the car, or as Camaro chief engineer Mark Dickens puts it, “This transmission is optimized for speed. With unique Track Mode calibrations and 10 gears, you are always in the perfect gear when rolling on or off the throttle.”

While that might seem like something that someone in that position just might say for purposes of marketing, it turns out that when they were developing the ZL1 1LE at the GM Milford Proving Grounds, when they ran on the road course they were able to reduce lap time on the 2.9-mile track by more than 0.5 second compared with the manual.

Having had the opportunity to meet and ride with some Camaro development drivers, trust me: when driving the six-speed they were undoubtedly giving it their all, and their all is a LOT.

Still, the automatic transmission beat them.

Has to be alien technology. Or some really, really good powertrain engineering.