Even Jeep enthusiasts who can’t afford a Renegade or Wrangler can get one of these.
#Jeep

It is fitted with a lithium-ion battery and is built with an aluminum structure and stainless-steel components. It is engineered to deal with sand, mud, snow and rough terrain. Not surprisingly, it is a Jeep.

But a Jeep bicycle. An off-road electric mountain bike. 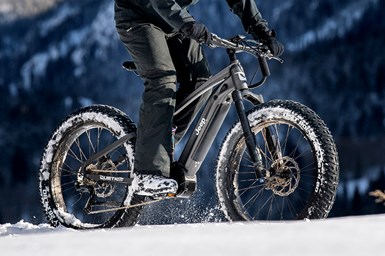 Yes, you can take on snow and hills and other places you wouldn’t be likely to ride a bike with this Jeep e-bike. (Image: QuietKat)

It is available with a 750-watt electric motor that provides up to 160 Nm of torque. There is a 10-speed transmission. It has four-piston hydraulic disc brakes paired with 203-mm rotors.

As a Class 2 Electric Bike, its speed is limited to 20 mph.

There is something called a “Fire-Link” suspension system that has a four-bar linkage, which sort of sounds like an independent rear suspension on something with four wheels rather than two. And speaking of the wheels, it is fitted with 4.8-inch wide tires (a.k.a., “fat tires”); the diameter is 26 inches.

No, it isn’t coming out of Toledo, Ohio, but from QuietKat of Eagle, Colorado.

And another difference from a Jeep with another set of wheels: it has a starting MSRP of $5,899.

Deliveries are supposed to start in June. And you can pre-order one here.