“Report to Board of Directors of General Motors Company Regarding Ignition Switch Recalls” should be more than a wake-up call to the executive staff of GM. It should be something that people at all companies reflect on.
#GeneralMotors 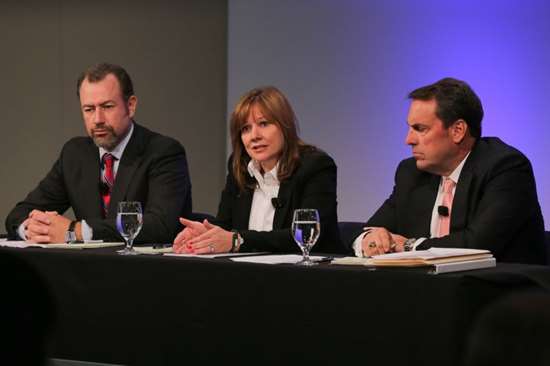 GM president Dan Ammann, CEO Mary Barra and executive vice president Mark Reuss (l to r) addressing the ignition switch failure. That problem may be unique to GM, but the lack of open and forthright cultures is something that is arguably endemic.

As I read through “Report to Board of Directors of General Motors Company Regarding Ignition Switch Recalls” by Anton R. Valukas of Jenner & Block, a remarkable document rife with more mismanagement and buffoonery than misdirection and cover-ups, the report that undoubtedly rocked the very foundations of the Renaissance Center when it was received by current GM management late last month, a phrase came to mind:

“There but for the grace of God go I.”

Let no one think that their organization is a place where there couldn’t be an analogous set of events such as those outlined chapter and verse.

I looked up the phrase and discovered that it came from a 16th-century British theologian, John Bradford.  He was burned at the stake in 1555.  “There but. . . .”

And it seems that a fundamental driver regarding the GM ignition switch problems that were overlooked, unreported, or otherwise had a blind eye turned toward goes back to what, metaphorically speaking, happened to Bradford.  But not everyone has the beliefs and fortitude of a theologian.  Most of us are somewhat more, shall I say, temporal, especially when it comes to our jobs.

As Valukas writes in the report:

“Some witnesses said there was resistance or reluctance to raise issues or concerns in the GM culture.  For example, a Red X Manager said that, if an employee tried to raise a safety issue five years ago, the employee would get pushback.  Mary Barra explained that problems occurred during a prior vehicle launch as a result of engineers being unwilling to identify issues out of concern that it would delay the launch.  Similarly, an employee survey reflected an issue related to speaking up.  In a Corporate Executive Board Company survey administered at GM in 2013, GM participants’ rate of reporting misconduct they observed was below the benchmark rate developed by the Compliance and Ethics Leadership Council based on the responses and experiences of participating companies.  A small number of participants also suggested a fear of retaliation.”

Note that there were clearly problems, and presumably problems not just related to the ignition systems used for the Delta and Kappa architectures.  “Pushback.”  “Unwillingness to identify issues out of concern that it would delay the launch.”  “Fear of retaliation.”

What is the likelihood that anyone would want to raise their hand in such an environment and say, in effect, “Uh, boss, there is a serious problem that is going to delay the launch of [insert name of project here] because we’re going to need to modify the [design/engineering/tooling] in order for it to work right.  And because of the delay, we’re going to not only miss our timing, but it is also going to cost us some money. . . .”?

Hard to imagine that anyone would.

But does anyone actually think that the General Motors culture as described in the report is in some way completely outside the norm, that GM, because it is GM, is sui generis, that is unique in what it does and how it does—or doesn’t—do it?

It wasn’t all that many years ago when companies—and not just General Motors—were shedding jobs like a Malamute sheds its coat during the summer.  And in addition to redundancies, there were salary cuts and furlough days and benefit subtractions and related non-encouraging activities.

So say you weren’t one of the people in your department who were given a corrugated cardboard box and an escort to the door.  What is the likelihood—knowing that your house was now worth less than your mortgage, that your kids’ orthodontist was tightening your wallet, that the car needed some serious work because that hoped-for new one wasn’t going to happen—that you’d raise your hand and identify an issue?

Mind you, I am not talking about issues that necessarily have fatal consequences.  I am talking about things of “The Emperors’ New Clothes” caliber.

How many of us work within organizational cultures where there truly is not merely the opportunity but the expectation that issues are raised without fear of retaliation, overt or delayed-but-certain?  How many of us want to tell our bosses that there is something wrong or even that they have lettuce stuck in their incisors?

How many of us as bosses are willing to take these messages with equanimity and encouragement, not with a snarl, visible or implied?

“Report to Board of Directors of General Motors Company Regarding Ignition Switch Recalls” should be more than a wake-up call to the executive staff of General Motors.  It should be something that people at all companies reflect on.

Remember: “There but for the grace of God go I.”