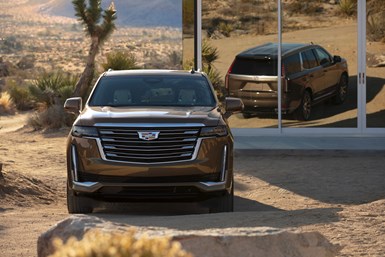 The 2021 Cadillac Escalade (all images: Cadillac)

And that gets you “Escala,” the name of a concept car that Cadillac unveiled in August 2016 at Pebble Beach Concours d’Elegance. The Escala is a car. The 2021 Escalade is a massive SUV. But according to  Phil Kucera, interior design manager, the inside of the Escalade is heavily influenced by the show car. 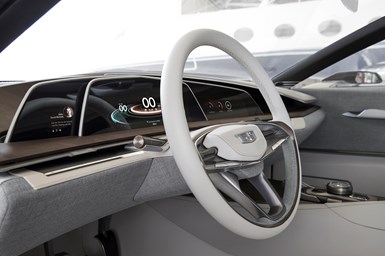 Inside the Cadillac Escala concept car—check the screens.

What’s In a Name?

In fact, Kucera says that when the Escalade was being developed, “car-like was not a dirty word.”

The point is that the Escalade, which originally launched as a model year 1999 vehicle, has long been something extraordinary at Cadillac, a vehicle that has not only racked up sales for the brand, but also serious margins. One simple way to consider the importance of the Escalade and its somewhat different existence within the organization is to realize that while the other vehicles in the lineup (and there are several vehicles that haven’t existed in the lineup as long as the Escalade has) have all had their names reduced to or were presented as alphanumerics, Escalade has maintained its name. Inside the production 2021 Escalade—screen remind you of anything?

When Kucera talks about the Escala influence on the 2021 Escalade, his primary interest is in the interior space of the vehicle, specifically the OLED screen that was used in place of more traditional cockpit electronics. While that certainly was advanced-looking even in the context of just a few years ago, it was something that might have been thought of as only “concept car”: the likelihood of seeing that in a production vehicle was none to slim. A more-traditional LED system, yes, but an organic LED system—well that’s for consumer electronics, not cars.

But Kucera says that one of the internal catch phrases that was used by the design teams for the SUV was “It’s only an Escalade,” and often the Escalade was modified by an adjective that drew a line under the importance of the vehicle.

What’s In a Number?

And to get a tangible sense of the importance, look at this sales chart of the Escalade, which was part of the “Doctor Data” segment on this edition of “Autoline After Hours,” where Kucera talked with “Autoline’s” John McElroy; Joe DeMatio, senior director of Content at Hagerty; and me:

While those numbers may not seem particularly high at first glance, taken into account that a good portion of those vehicle sales were for window stickers that filtered with $100,000, then ask yourself how many other vehicles sold in those numbers at that price point. Few, few indeed.

Anyway, back to the OLED. The Escalade designers decided that they’d shoot for getting the displays in the vehicle. What they did was to place three screens in sequence, such that there is a 7.2-inch diagonal touch control to the left of center, a 14.2-inch diagonal cluster display behind the steering wheel, and a 16.9-inch diagonal infotainment screen to the right of center, a combination that is in excess of 38 inches of total diagonal display.

And these displays aren’t just moderately useful, as they provide all manner of information to the driver, ranging from navigation that includes the ability to see the scene in front of the vehicle and instruction markings indicating such things as where the next turn will be; images from part of the available trailering integration package that provides up to nine camera views behind the Escalade; and a whole lot more. Inside the 2021 Escalade: lots of room for lots of goodness.

While there are controls that are accessed through a screen (using either a rotary control knob, steering wheel controls or touch), Kucera points out that there are also still switches for things that people like to get to right away.

There are eight available color and trim designs, including the “Gideon Whisper Beige” package that includes a custom woven fabric that Kucera says is actually an option beyond leather.

The 2021 Escalade, which rides on a new platform, provides 167.1 cubic feet of EPA passenger volume, which means that Kucera and his team had plenty of room to work in, creating what is something of a high-lux, high-tech room on wheels.

And you can see the vehicle (Kucera brought a 2021 Escalade to the studio) and learn about the inside execution right here.