Although some people in North America may find this to be surprising, the Jeep Compass and Renegade are currently being made in an FCA factory in Melfi, Italy, and what’s notable is that at the plant they are making versions of the vehicles that are not available in the U.S.—not just those powered by a diesel engine, but plug-in hybrid versions of the Jeeps. 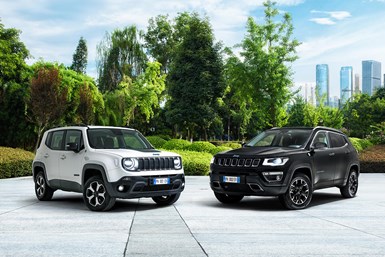 The plug-in hybrid versions of the Jeep Renegade and Compass—European executions of the 4x4s. (Images: FCA)

They’re designated the “4xe” versions, and they are capable of performing on-road as well as off. 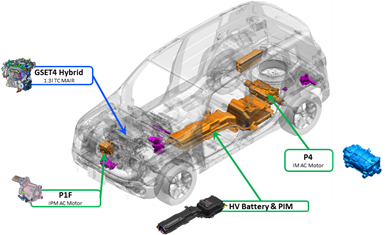 The electrical architecture of the Jeep 4xe.

The vehicles have a 1.3-liter turbocharged gasoline engine that works in conjunction with two electric motors. The engine is part of the new FCA Global Small Engine family and has a modular design. The all-aluminum four features the company’s third-generation MultiAir turbo tech that adjusts valve lift and timing and optimizes the intake valve opening and closing.

Because of the modular design, the engine offers these two Jeep models either 130 or 180 hp.

One of the motors is on the front axle and it also acts as a high-voltage generator. This motor is connected to the auxiliary belt and there is specific control logic that coordinates the motor with the engine and transmissions. The second motor is on the rear axle and it functions as an e-axle, helping generate traction. The two motors provide a combined 60 hp to the overall system output, so it is either 190 hp or 240 hp.

There is a 11.4-kWh, 400-v lithium-ion battery pack that uses cobalt-nickel manganese/graphite chemistry that allows the vehicles to travel an average range of 50 km (31 miles), based on the NEDC2 cycle. The battery is located under the second row of seats and is housed in a steel casing. There is a dedicated heating and cooling circuit to maintain battery performance.

In addition to being able to operate in a complete electric mode—at up to 130 km/h (81 mph), which would undoubtedly attenuate the range—there are two other modes: Hybrid, which is the default, and E-SAVE. 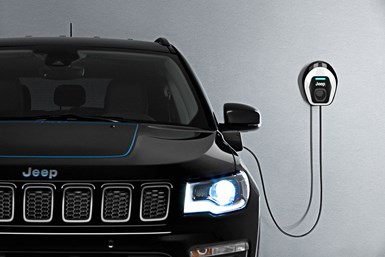 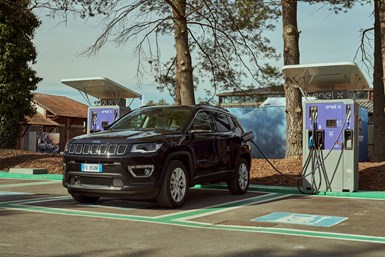 When the vehicle starts it is in Hybrid mode, with an initial bias toward the stored electrical energy. There is an optimization algorithm used by the hybrid control processor to manage the system efficiency. When the battery reaches its minimum state of charge the internal combustion engine is deployed.

However, if the E-SAVE mode is selected, this biases the system to the internal combustion engine to maintain the charge in the battery so that there is availability should there be a need to drive in electric mode such as in a city center.

Of course, when it comes to Jeeps, off-road capability is of concern to many drivers, and the 4xe provides it in an interesting way: there is no prop shaft from the internal combustion engine to the rear axle. The rear axle is powered entirely by the electric engine, which Jeep says means that torque distribution is more effective than it would be in a mechanical setup.

Because that motor is dependent on the battery, there is what is called the “Powerlooping” function, which ensures that the front electric motor (which is attached to the internal combustion engine) generates the high-voltage current to the rear motor for maximum traction, as when the vehicle is in 4WD Lock.

The high-voltage electrical components are protected from water intrusion so 4xe drivers can really go off-road.

And because off-roaders sometimes find themselves not only off the road but in water (all 4xe models can ford 40 cm (15.7 inches) of water), the high-voltage electronic components—the control modules and the wiring between the battery pack and electric motors—are fully sealed and waterproof.

We’ll have to wait and see.