According to Jose Garcia-Urruchi, head of Digital Engineering Capability, Jaguar Land Rover (JLR), the COVID-19 pandemic, which has had the JLR development and engineering teams working from home, has led to an acceleration of the implementation of digital tools and technologies in the organization—and not by a small amount.

Garcia-Urruchi said that in the past 2.5 to 3 months, they’ve covered “as much ground in terms of digital capability as we intended to cover over the next two years.”

Speaking during a webinar held by the Financial Times and sponsored by Dassault Systemes, Garcia-Urruchi said that the efficiency that the engineering team has developed during its period of working at home has been so immense that there is actually concern that going back to the office will reduce it. 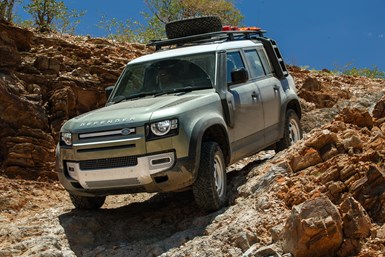 New Defender is capable and comparatively affordable thanks to the use of digital tools in its development. (Images: JLR)

According to Garcia-Urruchi, a primary driver for the use of digital design and engineering tools can be seen in the just-launched Land Rover Defender. He explained that right out of the box the vehicle was sufficiently mature thanks to the extensive digital prototyping and testing that had been performed before the vehicle was produced.

He said that “doing it traditionally would have almost been impossible,” and that the consequent vehicle would not have been as capable as the Defender and would have been significantly more expensive.