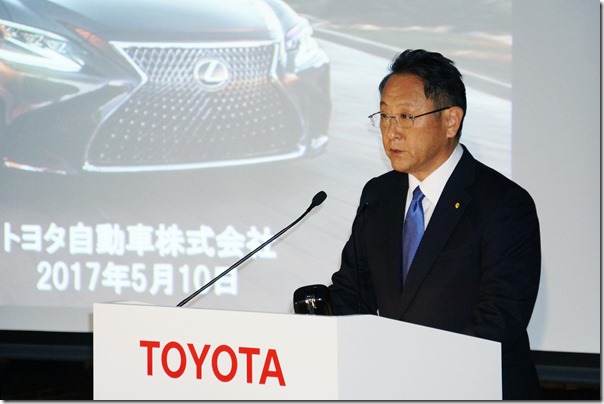 But in his presentation about the numbers, president Akio Toyoda said several things that seem to indicate that the company is going to get even better at manufacturing, which ought to give its competitors some serious pause. Or heartburn.

For example, he talked about the implementation of the Toyota New Global Architecture (TNGA) that underlies new products like the Prius and the C-HR, and which is being used for the forthcoming Camry, and said, “Until now, there were times when Toyota’s cars were called ‘boring’ or we said to be lacking in character. But now I feel that, in terms of driving and design, our customers have begun to favorably evaluate our cars.”

OK. They’re more attractive and have better ride and handling.

But here’s the proverbial kicker:

“On the other hand, when it comes to making ever-better cars in a smart way, it is becoming apparent that there is still room for improvement.”

Yes, he wants to improve Toyota manufacturing. But not just that.

Toyoda: “I feel a strong sense of crisis about whether or not we are actually executing car-making from the perspective of the customer in all Toyota workplaces—from development, production, procurement and sales, all the way to administrative divisions.”

In other words: Continuous improvement for everybody!

If Akio Toyoda feels “a strong sense of crisis” about execution within the Toyota organization and is committed to doing something about it, then CEOs at other OEMs the world over ought to rethink their approaches across the board, as well.