Steve Kosowski, manager, Long Range Planning & Strategy at Kia Motors America says that back in 2011-2012, the executives at Kia in Korea—as well as their opposite numbers at Hyundai—decided that they needed to develop an all-new platform for an “eco vehicle.” This vehicle could come in different flavors, conceivably, as in hybrid, plug-in hybrid, and full EV.

The result of this is manifest at Hyundai with the Ioniq sedan.

But Kia—the company that provides products that are sometimes out of the mainstream at first, but then go on to become successes (as in the Kia Soul: realize that while the other boxy vehicles, the Scion xB and the Nissan Cube, have gone away (heck, Scion has gone away), the Soul keeps on keepin’ on)—decided, Kosowski says, to address what was five or so years ago something of a white space. 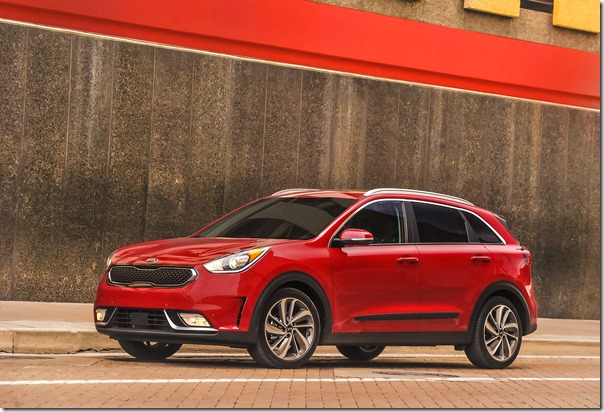 They decided that they were going to bring to market a small crossover rather than a sedan. While the Ioniq hybrid arguably goes head-to-head with the Toyota Prius, Kia has come out with a completely different form factor: the Niro.

While they may be from the same fundamental platform, the Niro is a vehicle for which the specifications note the minimum ground clearance (6.3 inches) and the approach and departure angles (17.3° and 29.2°, respectively). They don’t do that for sedans.

The Niro is powered by a 104-hp, 1.6-liter I4 running the Atkinson cycle. It is partnered with an AC synchronous permanent magnet motor that provides the equivalent of 43 hp.

Kosowski brought a Niro to the “Autoline After Hours” studio and gives the complete lowdown on the vehicle development—as well as insights on other aspects of Kia and the auto industry at large—to Autoline’s John McElroy, WardsAuto.com’s Christie Schweinsberg and me.

In addition, the three of us discuss a variety of topics, ranging from diesels to Ford’s announced layoff of 1,400 white collar employees, and the results of the 17th annual North American Automotive OEM-Supplier Working Relations Index Study conducted by Planning Perspectives, wherein the Usual Suspects (Toyota, Honda) continue to do well while another pair (FCA and Nissan) are bumping along at the bottom.