The iF Design Awards were established in Germany in 1953 with six guiding principles: To identify, support and promote good design To raise awareness of design among the public and the role it plays in our lives To help companies integrate design into their long-term strategies To safeguard the role of professional designer and boost awareness for this job profile To effect social change through design To support talented young people and create a public platform for young designers Each year the competition receives approximately 5,000 entries from some 70 countries.
#RollsRoyce #Kia #MINI

The iF Design Awards were established in Germany in 1953 with six guiding principles: 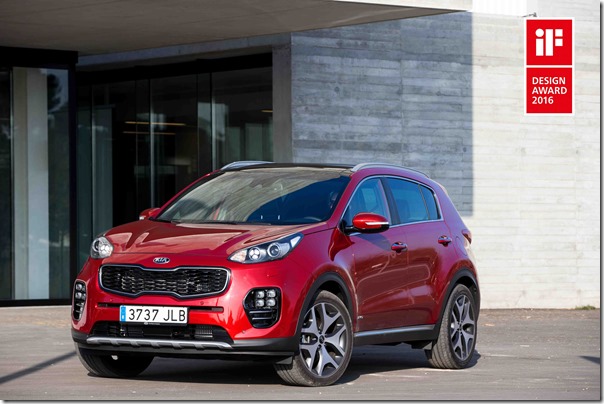 Each year the competition receives approximately 5,000 entries from some 70 countries. This year the exact numbers are 5,295 entries. They were assessed by 58 judges.

To be presented with one iF award is quite an accomplishment.

For seven years running, Kia Motors has received iF awards for its vehicle designs.

This year, it is being honored for its Sportage compact crossover and Optima sedan.

Clearly, Kia Design is not merely on a roll, but has significant momentum, which is probably more important, given that it is about where you’re going, not just where you are or where you have been.

*It should be noted that Kia is by no means the only multiple winner of automotive iF Design Awards. Mercedes is awarded for the CLA Shooting Brake, GLC, S-Class Cabriolet, C-Class, and smart fortwo Cabrio. VW is awarded for the Tiguan and Touran. Audi the A4, Q7 and R8. BMW is awarded for the 7 Series, XI, M6 GT3, and M2. MINI Clubman and Cabrio got the nod. Ferrari FXX K, 488 GTB and 488 Spider. Hyundai is awarded for the Tucson and the Avante. Rolls-Royce got one for the Dawn. And Nissan for the NP300 Navara/Frontier. Congratulations to all of the designers for their impressive accomplishments.