Revealed in Europe, designed by a global team, it will be coming to the U.S. later this year
#Kia #Apple #Bose

The Kia Sorento is a key model in the automaker’s lineup—some three million have been sold globally since its 2002 introduction—so for its 4th generation, based on an all-new midsize SUV platform, the company has seemingly left nothing to chance, taking a comprehensive approach to the vehicle, inside, outside and under the hood. 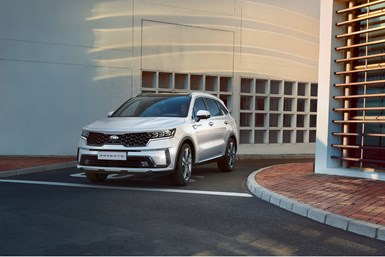 The fourth-generation Sorento. They seem to have given it everything. (Images: Kia)

Just to give you a sense of how seriously Kia is taking SUVs: It created the Telluride, which won the 2020 North American Utility of the Year right out of the box.

The new Sorento is bigger than the current model.

The wheelbase increase is based on shorter front and rear overhangs. One of the things they’re done for the front is engineered a more compact engine bay. 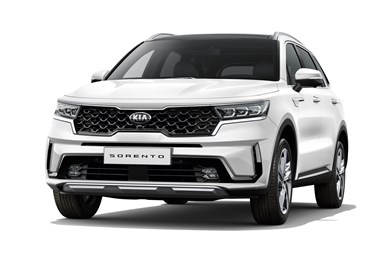 In addition to the tiger-nose grille, there are new tiger-eyeline LED running lights

The wheelbase size increase results in greater interior space for people—it seats up to seven, as it is a three-row vehicle—and stuff. Speaking of the latter, they have increased cargo capacity by 32% compared to the previous generation model, to 6.6 cubic feet with the third row in place for the diesel model; 6.3 cubic feet for the hybrid (as the packaging of the 1.49-kWh lithium-ion polymer battery beneath the floor takes some space).

The design theme for the Sorento is “refined boldness.” 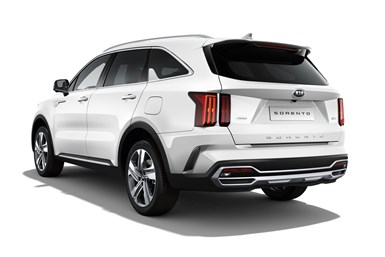 Note the sharp creases. The current generation has softer surfaces.

One way this is accomplished is through the use of sharper lines and creases. And to accentuate a certain sportiness to the SUV—and remember, there is the word “sport” in that acronym, even though it is generally the case that vehicles in that category are often focused on the “utility”—they’ve moved the A-pillar back by 1.2 inches, providing a faster look to the exterior.

While the vehicle features include the availability of a 10.25-inch touchscreen for infotainment purposes, Apple CarPlay, Android Auto, heads-up display, a 12-speaker BOSE system, charging outlets for all three rows, etc., etc., etc., one of the more interesting things that they’ll be offering in some markets is an ambient sound function called “Sound of Nature.” Apparently this includes a range of “relaxing natural soundscapes.” 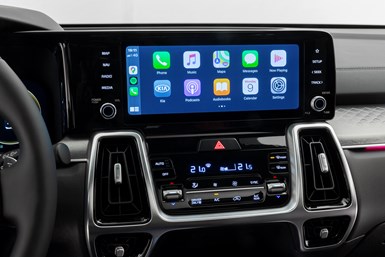 Given that the Sorento is available with all-wheel drive and a new Terrain Mode—which controls the torque to all four wheels and adapts the transmission shift points accordingly—presumably the driver of the Sorento can experience more actual sounds of nature.