Lasers can provide an excellent surface finish on many materials, but it can take more time than the user can spare. 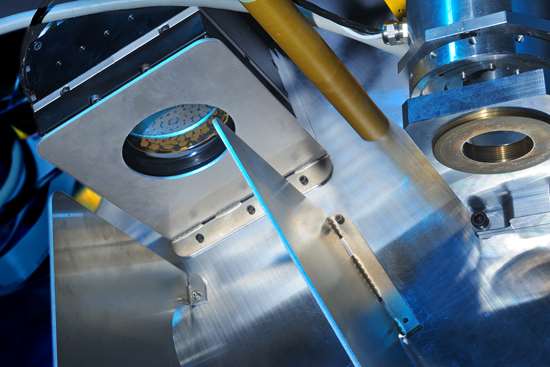 With an integrated piezoelectric deformable mirror, a laser beam adapts to varying part angles with switching intervals of less than five milliseconds.

Lasers can provide an excellent surface finish on many materials, but it can take more time than the user can spare. The Fraunhofer Institute for Laser Technology (ilt.fraunhofer.de/en.html) says that by the end of 2018 it—with its nine partners in the EU-sponsored “ultraSURFACE” research project—will finish testing two new optics that enable laser polishing, coating and structuring at speeds up to ten times higher than currently attainable.

To create a consistent, high-quality finish, a laser beam needs to hit the surface of the material with consistent strength. That’s easy if the part is flat and the laser can stay perpendicular to it. The challenge is when the part varies in shape. If the part has three-dimensional features, an uncorrected beam will hit them at different angles: What was a tight, circular beam will instead have a variety of oval shapes, spreading the beam’s energy over a wider area, weakening its effectiveness and resulting in an inconsistent finish. Some current systems use mirrors and/or lenses to adjust the shape of the beam as it travels across a multi-angle surface to compensate. But making those adjustments with precision takes time.

The ultraSURFACE partners have developed a new piezoelectric deformable mirror that is continuously adjustable to ensure that the laser beam adapts to the part’s shape and angles.

The mirror not only changes shape to adjust the laser beam shape, it can do so with switching intervals of less than five milliseconds.

The partnership has developed a second optic to speed surface structuring. It uses a diffractive optical element to split a laser beam into four beams. In conventional multi-beam concepts of this kind, the focusing optics as well as the shape of the component lead to beam distortion. In this system, each of the four beams can have its shape adjusted in compensation within milliseconds.

Fraunhofer reports a Swiss company is developing an industrial-grade machine that will use both systems interchangeably.