While there is interest in traveling through space, there should be more focused right here, on the ground.

I wish the billionaires working to send us 44 million miles to Mars were focused on enabling 44 million (or more) Americans to ride a bike around their neighborhoods and towns safely and enjoyably.

Bike riding is the ultimate answer to climate change; it improves personal health and creates socially stronger communities. It fits perfectly with the upcoming smart multimodal mobility future. However, we sorely lack quality bicycle infrastructure in the United States today which is tragic.

People who commute to work on a bicycle, I’ve read, have a 50% reduced chance of getting heart disease and a 40% reduced chance of getting cancer. We also know 40% of Americans are obese as are 18% of children (age 2 to 19). Could there be more important reasons to enable everyone living in an urban or suburban area to be able to ride a bike in an appropriate environment? You would think there was already a robust initiative to improve biking infrastructure across the U.S., but there is not. 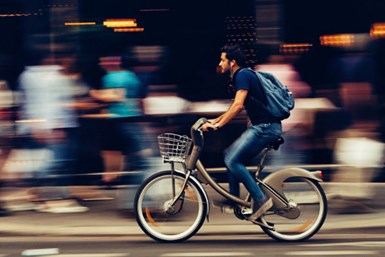 We only have to look across the Atlantic to see far more healthier biking countries. Several European countries have roughly 40% of the public riding a bike to work. What’s most surprising is that many of these bike commuters ride in the rain, cold, and even snow. Here in the U.S., we have only 0.6% commuting by bike on average, and in a warm weather city such as Los Angeles, that average is barely 2%. There are some pockets in the U.S. where more ride their bikes, such as Washington DC (5%).

I know what it’s like to ride a bike in the U.S., and you sadly have to put your life on the line, and it should not be this way. I’ve commuted to work on a bike in LA; Boulder, Colorado; Santa Fe, New Mexico; and Detroit over the past decade. I ride on the far right of the road. Sometimes there is a striped bike lane to ride in, often there is not. There is an endless line of big cars and trucks blowing by, and all it would take is for one of these drivers to be distracted for a moment and swerve toward me – and end my life. There should be little wonder why so few people bike in our car country. Tragically, 1,000 people died and roughly 500,000 were badly injured last year – just by riding a bike.

Protected bike lanes are the safest when there is some form of a physical barrier between cars and bikes. The problem is we have so few of them.

I can understand why there has been so little focus on biking infrastructure in our outgoing age of automobile dependency. Fortunately, this is all changing now as we move into a new, smart multimodal mobility future. We know the COVID-19 pandemic has had a silver lining: it has greatly advanced our society’s use of our new digital tele-access tools for many meetings; we no longer need to take the car. Reports suggest the number of Zoom calls we are having wasn’t expected until 2030. Most all of our homes and cities are now connected by the internet, and we are increasingly ordering more of our goods online and having them delivered. This is creating a condition where we will likely ride bikes more in the future, and even use other small micromobility modes to access local destinations. By improving bike lanes, we are also working to improve public transit offerings across our metro areas. This is not a theory as we have seen bike and e-bike sales more than double during the pandemic.

And with respect to the coming shared autonomous mobility revolution, where we will one day have millions of computer-controlled vehicles traveling all around a city’s highways and multitude of streets, not one of these amazing futuristic vehicles is better than a bicycle for a short trip on a nice day. That’s right, mind-blowing new technology vehicles will never be better than a bicycle for some of the trips we make.

We should prioritize creating millions of miles of better bike lanes in all U.S. urbanized areas ASAP. The investment will make us healthier, lower our carbon footprint, and allow millions of us to connect better with our neighbors. Perhaps this needs to be some type of a moonshot project? It’s not the billionaire’s responsibility, of course. But I find it unfortunate to be focusing on enabling human life on another planet when we struggle to make life great here on Earth.