Structured light scanning is a high-speed way of measuring surfaces, and the RS-SQUARED Area Scanner from Hexagon Manufacturing Intelligence is capable of scanning up to four data tiles—with each tile measuring 300 x 300 mm—each second. To increase the usefulness of the device, the company has created an integration with its Absolute Arm portable measurement arm. 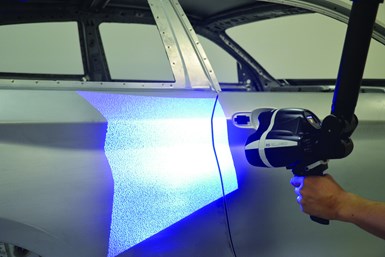 According to Anthony Vianna, product manager for the Absolute Arm, “With RS-SQUARED we want our users to scan their parts in the minimum amount of time. And that means not only the time to scan the complete part, but also the time to prepare it. The fact that RS-SQUARED is the first area scanner to not use reference markers in the traditional way—because the Absolute Arm does the referencing for it—is one of the key things that allows our users to measure with the minimum of down-time.”

The Absolute Arm 7-Axis weighs just 10.5 kg so it can be readily moved to where it is needed.

Hexagon has also released a Wireless Pack for the Absolute Arm; it provides communications via WiFi from the arm/scanner. There are dual-hot swappable batteries that allow all-day power.