The Lincoln Motor Company has unveiled a three-row crossover, a pre-production execution (which means that details are still publicly scant, as the company prepares to build the vehicle: they haven’t even announced what model year it will be, only that it will be launched next year), named the Aviator. 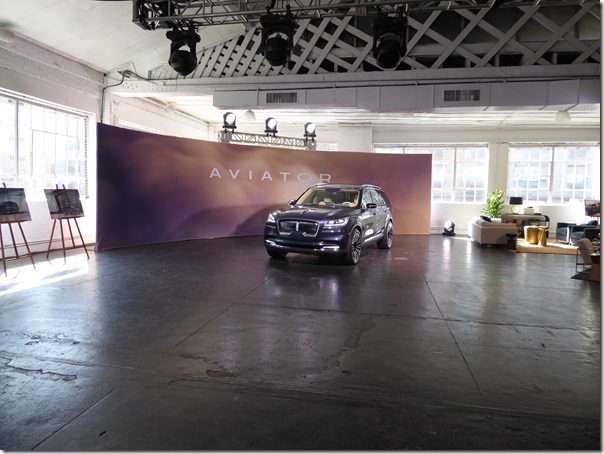 Joy Falotico, president of Lincoln, explains that the three-row vehicle goes right to the heart of the premium SUV market, the medium-size segment, which, she says, had sales of more than 585,000 units last year, sales reflecting the demand of millennials with families (she notes that the cohort aged 35 to 44 were big consumers of the vehicles in this segment).

And while Lincoln personnel aren’t revealing specific dimensions for the Aviator, to give some sort of context of the dimensions of the vehicle, according to Scott Tobin, Lincoln product development director, it is “about” 10 inches shorter than the Navigator and 10 inches longer than an MKC (soon to be renamed “Nautilus”). Given that the former has an overall length of 210 inches and the latter 190 inches, it seems like 200 is a good round number for the forthcoming crossover.

As for power, the vehicle, which has a rear-drive platform, an all-new platform, will also be offered as Lincoln’s first plug-in hybrid, combining a twin-turbocharged engine with electrification (the standard setup doesn’t include the hybridization). Again, exactly what engine will be used has yet to be divulged, but it is worth noting that the Navigator has a 3.5-liter twin-turbocharged V6, so there is certainly something readily available. 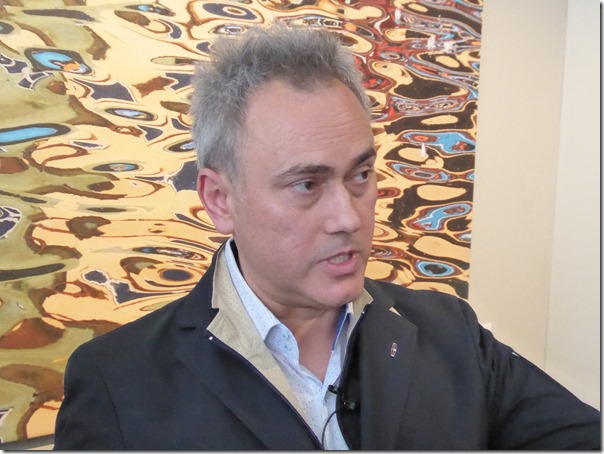 The design of the Aviator is where the vehicle really separates itself from other three-row vehicles. This is not a “baby Navigator,” by any stretch of the imagination. Design director David Woodhouse acknowledges that there are cues that have become familiar from recent Lincoln vehicles—like the shape of the headlamps and the design of the grille—but he notes that there have been modifications to them for the Aviator: there are four elements to the headlamp, going as wide as possible to draw the eye to the corners of the vehicle; as for the grille, Woodhouse says, “The signature grille is like a crown on the front end. We’ve reversed the mesh so that it becomes a negative inverse. Quite a mesmerizing thing.”

The goal of the design team was to create what Woodhouse terms “seductive beauty.”

While many vehicles of late—be they crossovers, full-on SUVs or sedans of various shapes and sizes—are typically described as being like an athlete by their respective designers, Woodhouse roles out with a descriptor for the Aviator that is certainly atypical: “In the studio, we use a ballerina as an analogy.”

Not a football player. Not a sprinter coming out of the blocks.

“A ballerina is an athlete,” Woodhouse says, adding, “Very strong. Very potent. But with a lot of poise and grace.”

He contrasts this fluid, sensuous beauty with what he sees in the designs from other marques: “an attack visualized. There is an overwhelming feeling in the marketplace of masculinity, overtness and aggression.”

Woodhouse: “We want to be about seduction, not attack.” 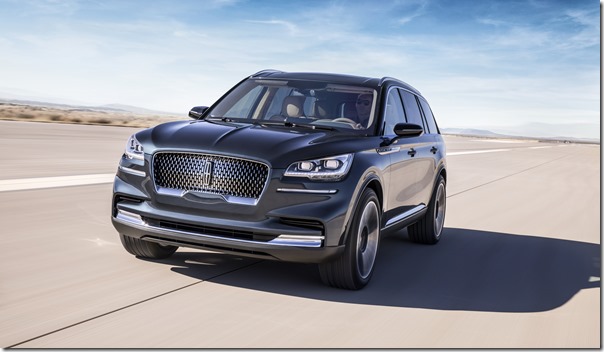 One graceful design feature is the way the roof arcs downward at the rear of the vehicle. While it is often said that by lowering the roofline there is a sacrifice of headroom for those in that third row, Woodhouse says that a 90th percentile male can sit back there in comfort, which means some six-feet tall.

As we are now in the interior of the vehicle, know that Woodhouse says that a goal was to create something of a “sanctuary, to instill a feeling of calmness, balance and equilibrium.” One of the ways this is accomplished (in addition to the use of high-quality materials) is through a strongly horizontal instrument panel. Woodhouse notes that while many vehicles are opting for what essentially amounts to a two-cockpit design (one for the driver, one for the front passenger), they’ve created a sweep across the front, which he suggests is intrinsically more calming than the quasi-fighter jet approach. 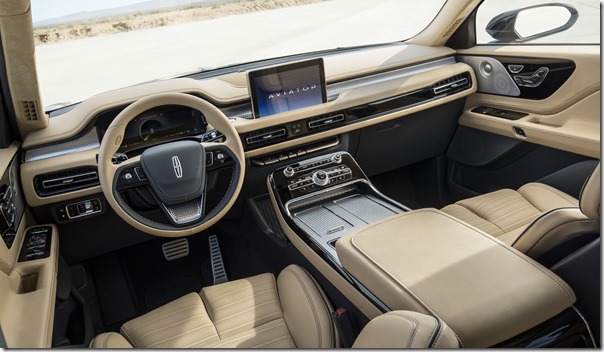 There are a couple of interesting technologies that are being deployed. One is “Suspension Preview,” which uses a forward-looking camera to detect potholes and bumps and then adjusts the suspension settings accordingly. The other is “Phone as a Key,” which, as its name implies, allows a smartphone to operate the Aviator without the presence of the keyfob.

Woodhouse says that with the Continental and the Navigator the themes that they’ve been developing for the last four-or-so years have been deployed, but that with the Aviator, there is a culmination of the direction that the company is taking, with elements and approaches that are quiet, confident, capable, appealing. A mixture that one doesn’t necessarily find elsewhere in the industry.