“We wanted to create a dramatic, youthful Lincoln with terrific harmony.” And with the Corsair, they’ve accomplished what they set out to do.
#Lincoln #engineer #HP

Lincoln Design has been completely transforming what a Lincoln looks like over the past few years, providing fresh yet familial forms, and with the introduction of the Corsair, the smallest of the sport utility vehicles in the lineup—it joins the Aviator, the Nautilus and the Navigator—it has created a full suite in that segment.

“We were trying to be more expressive with this vehicle,” says design manager Robert Gelardi, explaining that although it is smaller than the others, it is no less important. After all, Joy Falotico, president of the Lincoln Motor Company, explains that the Corsair is “entering the fastest-growing luxury segment,” one that essentially has a bimodal market with those entering the luxury segment buying vehicles of this type and those who have long been premium owners but who have decided to downsize—say as a result of becoming empty-nesters—are going to the small luxury SUV segment.

The Lincoln SUV lineup, going from the Corsair to the Navigator, with the Nautilus and Aviator in between.

David Woodhouse, Lincoln director of design, says that because the vehicle is smaller, there is an importance to pay particular attention to the details throughout the design. What’s more, whereas some of the competitors in this segment have designs that have edges and creases in the sheet metal, Woodhouse talks about how the S-curves that are characteristic of a ballerina are echoed in the form of the Corsair, pointing to the side panels that have what he says are the deepest draws they’ve had on a body side. (He admits that the designers were a bit concerned that the manufacturing personnel who were going to be charged with stamping the panels would push back, but this is something that didn’t happen.) 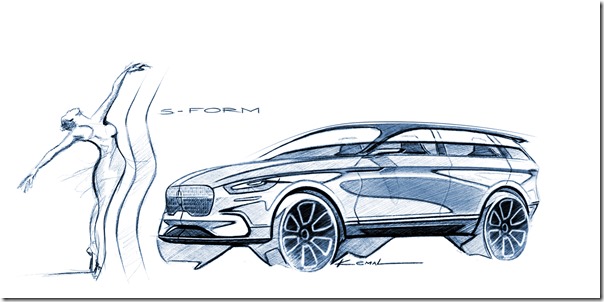 While the ballerina is cited by Woodhouse and Gelardi—there is an overall emphasis on the term “Quiet Flight,” which they say encompasses the terms beauty, gliding, human, and sanctuary—it is almost as though what they have worked to achieve is, sticking with the ballet theme for a moment there, an adagio, or slow, soft, continuous movements that flow.

Consider, for example, the roofline, which tapers back, with a slight cantilever over the backlight and the beltline, which moves slightly but perceptibly upwards toward the rear of the vehicle. Bothe combined provide a look of cutting through the air, but in a way that is supple, not aggressive.

And flow is a characteristic that Corsair chief engineer John Jraiche cites as regards his team’s contribution. “When you think of a luxury vehicle, you think of a beautiful design, luxury interior, and powerful engine. All of that is important, but the suspension and the architecture and the technology work together to provide that Quiet Flight promise.”

Jraiche says that whereas competitors in the segment want the people in the cabins of their vehicles to transfer engine sound in to the cabin, for the Corsair they want to transfer the noise out. To that end they’re using a dual-wall baffle system between the engine bay and the cabin, which attenuates the engine noise more comprehensively than, say, putting shoddy or some other material on the firewall. There is also active noise control used in the cabin. “This is a no-excuse luxury product in terms of quietness,” he says 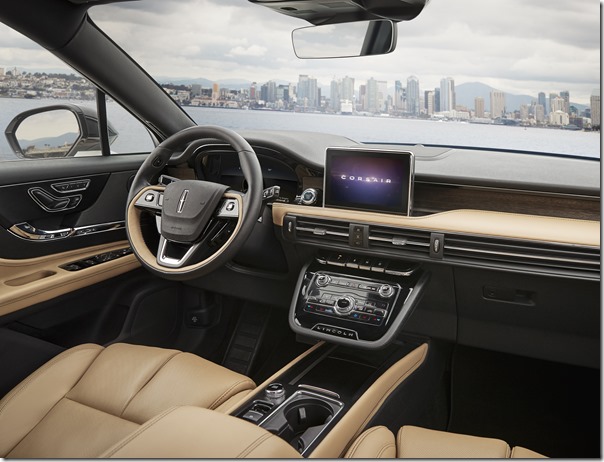 The interior emphasis is on horizontal lines, to draw the eye fully across the instrument panel.

To provide a smooth ride Jraiche says the Corsair features Lincoln’s first deployment of an integral bush rear suspension, a multilink setup: “It works to isolate all of the undulations and inputs on the road so that they’re not felt in the cabin.” The front suspension is based on MacPherson struts.

The Corsair is available with intelligent all-wheel drive that features a disconnect so that the front wheels can be powered without losses to the back when the torque isn’t needed in the rear. There are also driver-selectable drive modes: Normal, Excite, Slippery, Deep Conditions, and Conserve.

On the inside of the Corsair Gelardi says that because it is a smaller vehicle, they worked to provide a sense of space in the front, so they worked to make the instrument panel horizontal, and there are cantilevered elements which, again, stretch the eye across the space.

While this is a small crossover, there is surprising spaciousness in the rear seat as there is the ability to slide the second row by six inches, providing more room for the occupants or, by sliding forward, more cargo space under the hatch.

The Corsair is being offered with “Phone As A Key” capability, which means that it allows a phone to have the functionality that is typical of a keyfob without the fob. This means opening and starting. What’s more, there are some 80 features that a driver can set (e.g., seating position, favorite radio stations) and this information is identified through the Phone As A Key and adjustments are automatically made to the setup.

Note the deep draw in the body side forming an S shape.

As for drive-assist technology, Corsair comes with standard Lincoln Co-Pilot360, which encompasses pre-collision assist with automatic emergency braking and pedestrian detection, blind-spot information, lane-keeping assist, auto high-beam lighting, and a backup camera. It can be upgraded to the Co-Pilot360 Plus system that adds adaptive cruise with traffic jam assist (it can fully stop the vehicle and depending on the amount of time at 0 can resume without driver input) and speed sign recognition (if the cruise is set, say, at 65 mph, which is the speed limit in a particular area, and the speed limit goes up to 70 mph, when the camera reads the sign indicating the increase it can automatically adjust the speed accordingly); evasive steering assist to help avoid a collision with a vehicle ahead that is slow or stopped; reverse brake assist, which helps stop the vehicle should the rear sensor pick up an object during backing up; and Active Park Assist Plus, which requires only a push button activation to perform parallel or perpendicular parking.

Woodhouse: “We wanted to create a dramatic, youthful Lincoln with terrific harmony.” And with the Corsair, they’ve accomplished what they set out to do.