Lincoln continues to focus on its SUV lineup (Aviator, Corsair, Navigator, Nautilus) with a subtle but significant change to the interior of the Nautilus
#Lincoln

Michael Sprague is bullish about the position of Lincoln in the market. He points to the October sales results, which show the brand up 2.8% compared to October 2019, results that are primarily driven by the company’s slate of SUVs, which were up 13.3% (Lincoln is leaving sedans behind, so the October rise is all the more notable because last year the MKZ and Continental made greater contributions to the overall number). 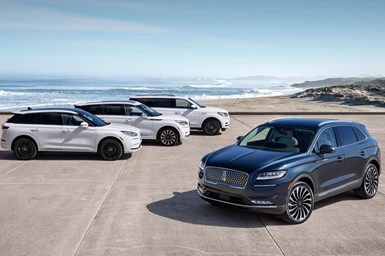 Sprague also notes that with 5.5% of the premium retail market, Lincoln is on par with. . .Tesla.

Sprague, incidentally, is the North America Director of Lincoln.

One of the things that Lincoln was doing pre-pandemic to help differentiate itself from other marques was offering standard pickup and delivery (PDL). It has been doing this since 2016.

Its PDL has been growing 50% year-over-year since it began.

Clearly this is more than a transactional relationship between Lincoln and its customers (or “clients,” in Lincoln-speak).

Lincoln introduced the Nautilus midsize SUV at the end of 2017 as an MY 2019 vehicle.

The basis of the vehicle was the MKX. The vehicle was given a fresh look inside and out; the powertrain lineup went all-turbo; tech like the driver assistance Co-Pilot360 was embedded in the vehicle. And almost three years to the day that it announced the first-ever Nautilus, it has given the vehicle a significant interior change for MY 2021, as well as provided some exterior modifications (e.g., Earl Lucas, chief exterior designer for Lincoln, describes it as having a “simpler, crisper, more harmonious front end; the Nautilus features coast-to-coast chrome on the lower part of the fascia”).

Inside, however, there is a new look. Robert Gelardi, chief interior designer, says, “We are emphasizing the horizontal, with stacked horizontal design elements.”

One of the most obvious horizontal executions is that of the placement of the 13.2-inch touch screen. Whereas there is a tendency to put screens in a vertical orientation in the instrument panel, the arrangement of the horizontally placed knobs and buttons on the center stack, the horizontal tabs for the gear selection above it, the air vents embedded in stitched trim, and the screen provides a sense of the panoramic.

Notice the strong horizontal approach to the instrument panel.

A characteristic that Lincoln personnel emphasize about their vehicles is calm, as in referring to the “Quiet Flight DNA.” (This even to the extent that Lincoln is partnering with Calm, the company that has created a mental fitness app, providing Lincoln customers clients with a one-year complementary premium membership). Gelardi points out that one of the most serene sights is a sunset in the ocean, as the sea and sky provide the strong horizontal lines in one’s perspective.

The vehicle also features a “Constellation” theme on the screen, a background for the SYNC 4 system that has blue hues with orange accents, again glossing the sky.

It is more about tailoring than transformation.

Which seems right for the brand.