Lincoln Navigator Concept: A Grand Concept for a Grand Journey

Kumar Galhorta, president of Lincoln, often uses the word “journey.” Which is an apt metaphor, inasmuch as Lincoln makes cars and crossovers and a full-size SUV, which provide the means by which people take journeys, and the Lincoln brand itself is on a journey, in that it is working to gain global traction in the luxury marketplace where it had seemingly stalled during the past several years.
#oem #HP #Lincoln

Kumar Galhorta, president of Lincoln, often uses the word “journey.” Which is an apt metaphor, inasmuch as Lincoln makes cars and crossovers and a full-size SUV, which provide the means by which people take journeys, and the Lincoln brand itself is on a journey, in that it is working to gain global traction in the luxury marketplace where it had seemingly stalled during the past several years.

Certainly there is momentum on this Lincoln journey. 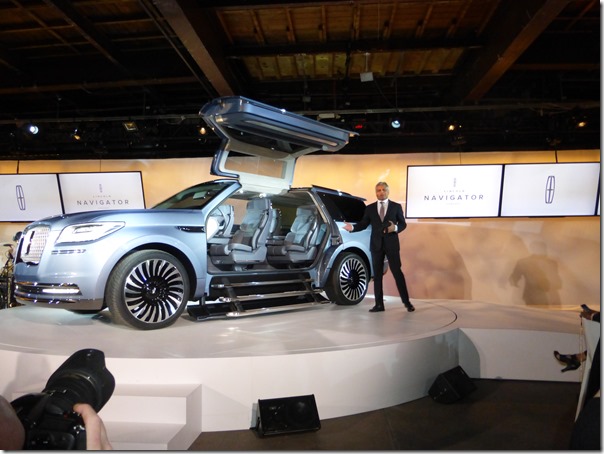 Galhorta points out that 2015 was the first full year that Lincoln products were on sale in China, through 33 dealerships, and that the company sold 11,630 units, which, he explains, is a brisk pace vis-à-vis sales from other luxury marques there. Notably, of ALL of Lincoln’s dealerships, three of the top 10 as regards deliveries are in China.

(If you’re wondering why all of this talk of China, know that it is the place where luxury brands do exceedingly well. Lincoln is heavily focused on that market, as is crosstown rival Cadillac, both of which are late to the proverbial party, particularly as compared to their German lux competitors. It is not as though either Lincoln or Cadillac is going to neglect their home market in any manner, but as this is a global industry, it is absolutely necessary to be competitive elsewhere. As the likelihood of selling a whole lot of Lincolns in Stuttgart, Munich or Ingolstadt is low, odds are better to get into the space where there is high demand and little in the way of domestic brand loyalty. Thus, China.)

The latest step on the Lincoln journey takes the form—the massive form—of the Navigator Concept, which the company introduced Monday night in Manhattan. 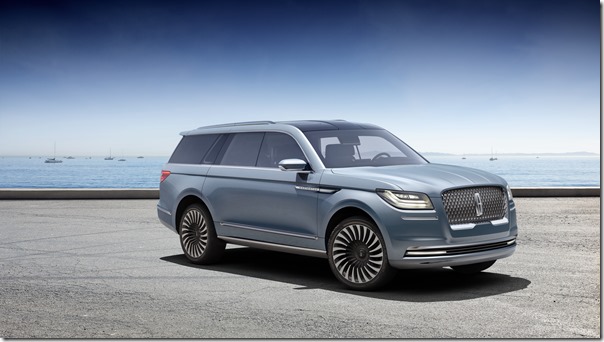 Know that the commercially available Navigator L is 222.3 inches long, has a 131-inch wheelbase, is 78 inches high, and 78.8 inches wide, so we’re talking about something that is, to understate the case, sizable.

What is most astonishing about the Navigator Concept is that while Galhorta says the design team was influenced by luxury sailboats and yachts, it is probably more the case that they were influenced by sea gulls, because the vehicle features gull-wing doors. The doors, which take up the space that two ordinary post-pivoted doors, open with the majesty of those of a bank vault (where, of course, said vault doors hinged on the top rather than the side). 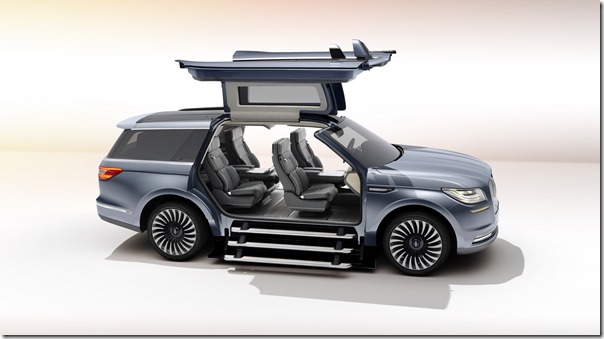 In addition to which, getting into the Navigator Concept takes on the form of a grand gesture in that rather than being a simple single powered running board that permits a set up into the cabin, but there are three teak-inlayed steps (“concertina steps”) that roll out like a red carpet.

Around back, there isn’t just cargo space: rather, there is a “wardrobe management system,” which appears as though one would need a valet to appropriately organize for one’s journey. (It really is quite a clever idea, something that goes far beyond the usual storage bins that one can order off the option list at a dealership.)

Galhorta talks about the 30-power seats and the 400+-hp 3.5-liter twin-turbo V6 and Revel audio system and 360-degree camera and the WiFi monitors in the headrests and the driver mode selectable settings and suchlike. 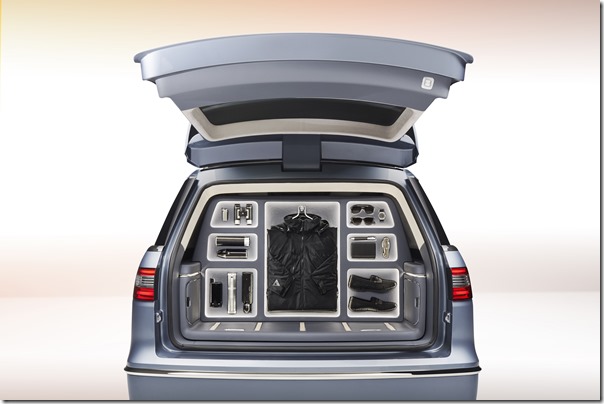 But in the presence of the Navigator Concept, the imposing presence of the luxury SUV (a type of vehicle, incidentally, that Lincoln claims to have pioneered back in 1997), all of those things seem simply like so many small details, important though they may be.

In the Navigator Concept, it seems as though the journey would be its own reward.