Living in the Future (Now)

“There is a clear need for this generation of trucks. We are the pioneers willing to tackle it.”--Wolfgang Bernhard
#Freightliner #Daimler #Tesla 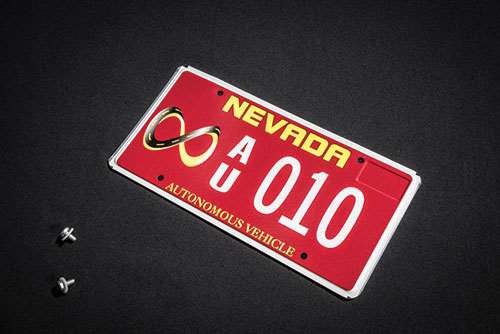 So you go north on I-15 away from the Strip, out to the Las Vegas Motor Speedway. You’re about to see, as Wolfgang Bernhard, Daimler board member responsible for Trucks and Buses, says, “history being made.”

No, this has nothing to do with Sprint car racing. Nor table games. Arguably, it is about a gamble, but the people at Daimler don’t necessarily look at it this way.

Bernhard is there to obtain, from Brian Sandoval, governor of Nevada, the first license plate for a fully autonomous truck that will operate on the roads of Nevada. And this is “truck” as in Class 8 truck.

Martin Daum, president and CEO of Daimler Trucks North America, says that this will “change the future of trucking.”

Just as Daimler has a fairly serious position in autonomy for passenger cars, it is securing itself the same with the development of this vehicle.

According to Bernhard, they’re working toward a “solution to a global challenge.” That challenge has a lot to do with the anticipated growth—almost an explosion—of road freight around the world. He says the figures indicate volumes will triple by 2050. And as there are more trucks on the road, there is an increase in the possibility of accidents. Bernhard said that about 90% of the truck accidents that occur are predicated on driver error, and a fundamental contributor to that is driver fatigue. Sounding much like the proponents for robots for factory automation some 25 years ago, Bernhard said, “The autonomous truck never gets tired, never gets distracted.”

“There is a clear need for this generation of trucks,” Bernhard said, adding, “We are the pioneers willing to tackle it.”

Sven Ennerst, global head of the Daimler Trucks Development Department, said that within Daimler they are leveraging the knowledge and technology being developed for vehicles both large (e.g., the truck that got the license plate, the “Freightliner Inspiration,” based on a production Freightliner Cascadia Evolution) and small (the S-Class). While he said that there are similarities, there are differences, too, especially when you are dealing with “a 40-ton application.” At that point, safety is a considerably larger consideration.

Explaining why the truck is being introduced in Nevada and not in Germany or elsewhere, Bernhard said, “We made it clear when we started in July, whoever has the regulatory framework in place would be the first to have autonomous vehicles.” He added, with a nod to Sandoval, “These guys were pretty fast.”

A key issue in the development of autonomous vehicles is the regulatory one. Daum said, “Before we can mass produce, we need the regulation. Ultimately, it has to be regulated federally. But initially, it has to start with states.”

The Inspiration is a Level 3 autonomous vehicle, which means that there is a driver in the loop. Should something go wrong, or should conditions warrant, then the driver is alerted with a series of alarms. Which should make the whole idea of a semi rolling along while the driver is otherwise occupied somewhat less alarming.

The Inspiration truck is a data point. It shows that there is serious time, effort, energy, and resources being invested in advancing mobility. I remember back in the ‘60s when, as a Cub Scout, we were periodically shown industrial films created by one of the Detroit car companies on the future of the automobile, which was always something amazing. Like cars and trucks that could drive themselves. Although the narrator would always intone how this would be realized by the 21st century, it has struck me over the past several years how that future has never really taken shape.

But now it is. Whether it is a company like Tesla making electric vehicles or Daimler Trucks pushing the technology needed for autonomy, we are now seeing that the change has occurred and is occurring. Anyone who thinks that this is all a passing fad or fancy, that cars are to be powered only by gasoline and trucks are only to be piloted by good buddies are going to find themselves stuck in a past that isn’t particularly appealing.