Bob Lutz says that a few years ago, his partner Gilbert Villarreal was interested in the Fisker Karma but not particularly taken with the hybrid powertrain. Lutz and Villarreal, who had established VL Automotive, were working in a facility where EDAG Engineering had space. And EDAG had done engineering work on the Karma.

One thing led to another, and now VLF Automotive has taken Villarreal’s idea and transformed it into the Destino. Yes, it is a Fisker Karma. . .but rather transformed, as in having a Corvette LS9 V8 engine under its hood. 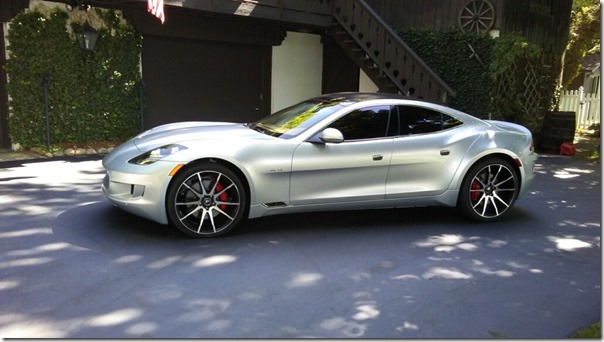 (Oh, and the addition of the letter “F” to the name of the company? In January 2016, Henrik Fisker, the man who developed the donor car, joined Lutz and Villarreal.)

Lutz says that they’ve made other modifications to the vehicle, such as different front and rear fascias. The solar panels that had been on the roof have been replaced by carbon fiber.

Lutz reckons that the car, which is now “mechanically mostly a GM product”—with the product in question being a Corvette—has a top speed on the order of 200 mph—and realize that this is a sedan, not a coupe, and that this car doesn’t stint on amenities.

Lutz, whose resume includes stints at OEMs from BMW to GM (he retired from GM in 2010, where he’d been the vice chairman of the corporation), explains that a car like the Destino couldn’t come from a major carmaker for the simple reason that a company like VLF was focused on doing things in a thrifty manner, and, well, big companies, even those that are oriented toward lean, are big.

He says that whereas they were able to do the tooling for the front fascia for about $30,000, it would cost significantly more for a major car company. (Admittedly, however, a major car company would be producing more cars that the potential production run of Destinos, which is predicated, primarily, on the availability of existing Fisker Karmas.)

Lutz holds forth on a number of subjects on this edition of “Autoline After Hours,” where John McElroy and I are joined by Frank Marcus of Motor Trend.

While guests ordinarily stay on the hour-long program for about 30 minutes, Lutz goes for the entire 60—and then some.

He opines on the future of automotive brands. On autonomous vehicles. On the Chevy Bolt. On the Lincoln Continental.

And on a whole lot more.

There is no one else in the auto industry with the breadth and length of experience that Bob Lutz has.

While you might think that you know what his opinions on things will be, trust me: when he starts talking about the future of vehicular transportation, despite the fact that he is sitting within 10 feet of a car with a 638-hp V8 that he’s selling, you will be absolutely surprised at where he sees it all going within 30 years.

You will be really surprised.