As Darren Palmer, global director battery electric vehicles, Ford Motor Company, puts it about the soon-to-be-arriving Mustang Mach E, “We want the car to get better as you own it.” So to that point, he explains, they’ve designed every module in the vehicle to be over-the-air updateable. 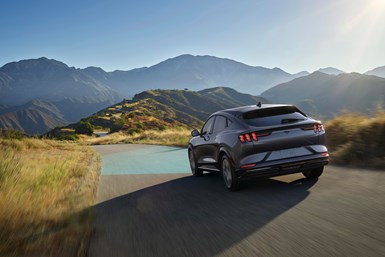 Radar and camera scan the road ahead. (Images: Ford)

And one of the things that a number of Mach E owners are undoubtedly going to want to update is their Co-Pilot360 2.0 system so that they can get their Active 2.0 Prep Package fully utilized through the Active Drive Assist capability, which will allow drivers to have hands-free driving on more than 100,000 miles of divided highways throughout the U.S. and Canada.

This system makes use of cameras and radars on the vehicle, as well as what Chris Billman, Ford engineering manager, considers an important element, an infrared camera system that faces the driver and detects the driver’s head position and eyes to make sure they are looking forward.

As Palmer points out, because this is a Mustang, the drivers are likely to be wearing sunglasses, so the infrared camera is capable of seeing through the lenses. Hands-free driving is facilitated by a system that monitors the driver’s head orientation and eyes.

Considerable effort was put into the human-machine interface (HMI) to assure that the drivers would be able to understand how to get the system into the hands-free driving situation. Palmer explains that one of the key elements is an animation of a steering wheel and a pair of hands on the center cluster that shows when hands-free is—and isn’t—a good idea. There is also a graphic of a blue bubble around the vehicle that indicates when the system is active. Palmer says that Ford developers drove more than 650,000 miles in developing the system, not only the functional part (he stressed that they worked to make the system activation and deactivation as seamless as possible, as they found systems offered by other OEMs somewhat unwieldy) but the HMI part, as well. There’s little sense in having a system in a vehicle that is meant to make things easier for a driver if the driver can’t use it.

Billman cites some interesting aspects of some of these features.

For example, an extension of lane detection is road-edge detection that scans the road ahead and determines if the vehicle seems to be drifting toward grass or dirt.

Extensive efforts were made to make sure that the information regarding Active Drive Assist was clearly understandable to the driver.

The active cruise control with stop-and-go has the ability to re-engage after the vehicle has been stopped for up to 30 seconds; the system heretofore offered by Ford required driver intervention after three seconds.

The intersection assist is used when the vehicle is making a left-turn. The camera and radar (also used for pre-collision assist) detect if there is a possible collision coming from a vehicle perpendicular to the Mach E.

Going forward there will be more tech revealed about what is arguably one of the most important vehicles of not only this year.