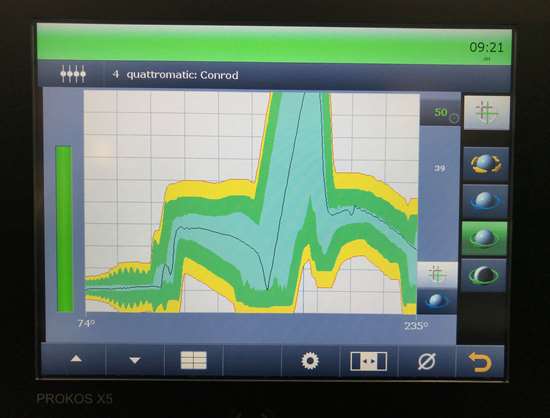 An early stage of the Brankamp X7 learning the force signature of a correct stamping operation. As it learns, the envelope of acceptable, worrisome and unacceptable parameters tightens around the line of the force curve.

A cold forming progressive header with the Brankamp system. Forming and stamping equipment can be retrofitted to use the system.

MIT’s Jenga-playing robot learns not from a preloaded database of possible moves but by trying out moves itself.

What’s interesting about the system is not that it can recognize production faults by referencing a deep database of stamping process information—though it can—but that it also recognizes faults based on its own experience of monitoring and seeing patterns in the production variables.

This X7 machine, in other words, learns.

As it monitors signals coming from force sensors placed on the stamping press, its 15-inch color touch screen displays a thin black line—the force curve of the press stamping a part. Enveloping the force curve line is a multi-colored bar that shows the parameters of acceptable force.

During an operation, if the signals match the learned curve—shown on the display as being within the tight green sheath, nothing happens beyond the data being recorded so that it can be kicked up to an enterprise resource planning system.

If the signal moves outside of the green and into the yellow, however, the system informs the operator of the location of the fault. If the signal strays into the red, the system also stops the press to prevent damage.

While machine monitoring per se is nothing new, Hudson points out that an operator need only label in the system database a cause of a fault—slug, short fee, long feed, etc.—once. “And thereafter, any time someone runs the same operation using the same setup, the X7 system will recognize the fault for what it is.” If the fault reoccurs, the system flags not only the location of the fault but also the type and cause.

Knowing exactly what type of fault is occurring, where, and therefore how to address it can save valuable time. But keep in mind that even before a particular fault has been diagnosed and labeled by a human operator upon its first occurrence, the system already has learned to, at least, recognize it as a fault—as a variance from the force signature of a well-stamped part—and will flag it as such.

Machine learning capability is becoming a sought-after feature not only in stamping operations but throughout a wide range of manufacturing and production systems, from automation controllers such as the Omron Sysmac AI (omron.com) to operations management software such as Falkonry LRS (falkonry.com). And more are coming.

For example, the EcoScreen Equipment Analytics system from Dürr Systems Inc. (durr.com) uses IoT technology and analytics to monitor and improve paint shop processes. Its streaming analytics module analyzes the data from sensors arrayed throughout the paint cell—from robots and conveyers to the paint atomizers—in real time. Using algorithms, it can identify even tiny anomalies in the processes so that operators can address the problem before a car body leaves the paint booth.

But the company realizes that the ability to quickly share collected data—that is, knowledge—and use it to spot and address problems is not yet the same as actual machine learning. For that reason, it is also developing a new module for batch analytics applications that work through the use of artificial neural networks.

In this module, which is in trials at a customer, “the software learns the optimal process condition automatically and registers every deviation. This means that the software solves problems through machine learning,” says Dürr Systems AG President and CEO Dr. Lars Friedrich. “If the self-learning modules detect trends, problems in the equipment can be identified in advance by specifying a forecast of the event time.” The module is expected to be released later this year.

Earlier this year, in a basement at the Massachusetts Institute of Technology, an extreme example of machine learning took place with a six-axis ABB IRB 120 industrial robot fitted with a soft-pronged gripper, a force-sensing wrist cuff, and an external camera.

The robot learned to play Jenga.

For those not familiar with this game of dexterity, there is a tower built with 54 wooden blocks. There are 18 layers. A block is removed from a lower layer and placed at the top of the tower. This continues until the tower falls.

In this instance, as the robot selected and moved a block (sometimes blocks are pushed out of the structure, sometimes pulled), visual and tactile feedback from the camera and the cuff are analyzed and compared with previous moves. Based on that, the computer learns which conditions lead to success and which lead to the people in the room shouting out “Jenga!” as the tower tumbles.

While in a non-machine-learning approach it might have required the robot to perform the task tens of thousands of times to achieve proficiency (as anyone who has played Jenga will tell you that you don’t want to rebuild the tower that many times), the MIT arrangement was able to successfully learn with just 300 attempts.

Details of the Jenga-playing robot are published in the journal Science Robotics.