Mack has been absent from the medium-duty market since 2002. Now it is back with two new medium-duties
#Mack Trucks 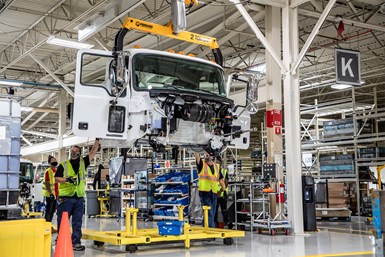 Mack made a $13-million investment in equipment, tooling and building enhancements to produce the Class 6 and Class 7 trucks in the 280,000-sq. ft. facility that is dedicated to the trucks’ production. The company plans to have 250 workers building the trucks by the end of February 2021. Although the COVID-19 pandemic slowed some of the work, Antonio Servidoni, vice president, Medium-Duty Operations,  says that they’ve been working right along since the plant was announced on January 30, with personnel coming into the facility, and they’re on track ramping the production of the vehicles as they are taking all precautions against COVID-19.

The front end design of the Mack MD is meant to resemble that of the Mack Anthem, the big rig.

The MD6 has a gross vehicle weight rating (GVWR) of 25,995 pounds. The GVWR for the MD7 is 33,000. Both are available in 4x2 configurations. The bumper-to-back-of-cab measurement for both is 103 inches, which Mack says is the best in class.

The standard powertrain is a Cummins B6/7 inline six turbodiesel producing 220 hp and 600 lb-ft of torque that is mated to an Allison 2500HS six-speed transmission. 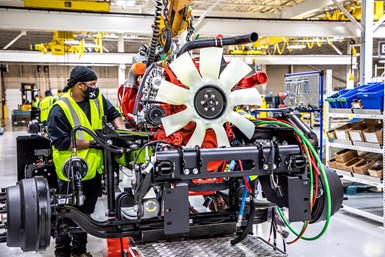 The standard engine is a Cummins B6.7 turbodiesel.

The trucks are offered with eight different wheelbases, that can accommodate 10- to 26-foot van bodies. The trucks can be used for applications including refrigerated vans, stake bed/flatbed, dump, and tank; according to Jonathan Randall, senior vice president, Mack North American Sales and Commercial Operations, they cover about 75% of medium-duty applications.

The Market & the Making

Randall says that there are approximately 100,000 medium-duty trucks sold in the U.S. and Canada each year. With these new trucks, Mack now has an entry—something that it hasn’t since 2002, when the Mack Freedom went out of production.

And despite all of the flux that is going on in the world at large as a result of COVID-19, Randall says “the market will continue to be solid.” 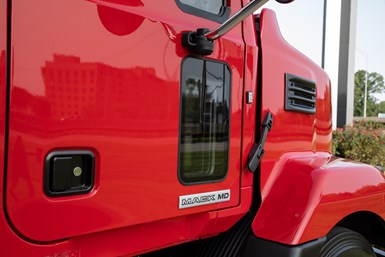 The MD trucks will do plenty of work in urban environments, so there is a standard “peep window” built into the passenger’s side of the door so the drive has a better view of the truck’s surroundings.

According to Servidoni, there are lean production operations being used throughout RVO in producing the trucks, including vendor-managed inventory and a pull system for replenishing materials.

When asked how long it takes to build a truck, Antonio says the answer is very sensitive from a competitive standpoint.

But he admits, “It can go as fast as the same day.”

At which Randall quips, “Which is not fast enough.”

Clearly Mack thinks it has competitive products being built at RVO.