Magna International is focusing on electrification, autonomy and smart mobility. This is taking the form of things ranging from an electrified system for rear axles (eDrive 1.0) to a collaborative arrangement with Lyft, which includes the co-development and manufacture of self-driving systems.
#engineer #Ford #Chrysler

Swamy Kotagiri, chief technology officer of Magna International, says that the massive automotive supplier—in 2017 it had $38.9-billion in global sales; it has 173,000+ employees, 340 manufacturing operations, 89 engineering/product development/sales centers throughout the world—which has four primary areas of business, including Body Exteriors & Structures (exteriors, body and chassis, roof systems), Power & Vision (powertrain, electronics, mechatronics mirrors, lighting), Seating Systems, and Complete Vehicles, is focusing on electrification, autonomy, and smart mobility. This is taking the form of things ranging from an electrified system for rear axles (eDrive 1.0) to a collaborative arrangement with Lyft, which includes the co-development and manufacture of self-driving systems.

This company just isn’t talking about “the future,” but is actually figuring out what needs to be done and developing it. 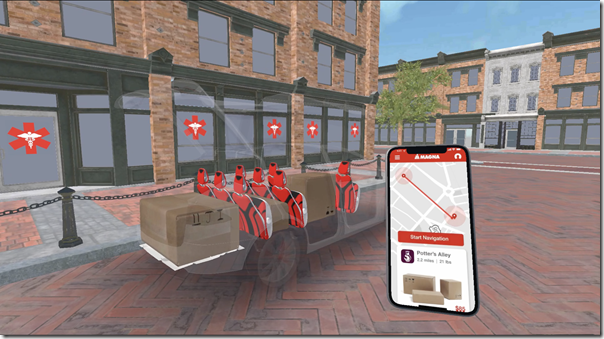 The Cargo configuration, with the seats folded and moved.

Mike Bisson has spent his last 30 years at Magna, the last seven of which he’s served as the president of Seating, and operation that accounts for $5.3-billion of that $38.9-billion and has 27,000+ employees in 18 countries and 56 manufacturing facilities.

When it comes to things like autonomy and smart mobility, once the discussions of sensors, computation, and actuators are over (or before, as let’s face it: those things can be rather complex), then it generally goes right to the interior, as there is the likelihood that the use cases for a car that one doesn’t own or that one doesn’t drive but is driven in is going to be unlike interiors as we have come to know them.

Bisson says that Magna Seating is presently working with the GM Cruise AV vehicle, the Ford Chariot ride hailing service, and the Waymo FCA Pacifica AV, which is providing them with solid experience. (He uses the phrase “future ready.”)

But beyond that, Dino Nardicchio, Magna Seating global vice president of Advanced Technology Engineering, says, the organization launched a global ethnographic study in 2016 that surveyed people in Los Angeles; Cleveland; Manchester, UK; Frankfurt, Germany; Hangzhou, China; and Guangzhou, China. This was more than just a checklist. Nardicchio says that he participated in the research in China, which had him spending time with 18 families (nine in each city), in their houses and in their vehicles, to find out not only about their lifestyles, but how they use their vehicles and what “pain points” they experience related to their seating. Nardicchio says that a “huge takeaway” for him was to learn that people want their seats to adapt to their needs, not the other way around, which is arguably the historic approach. 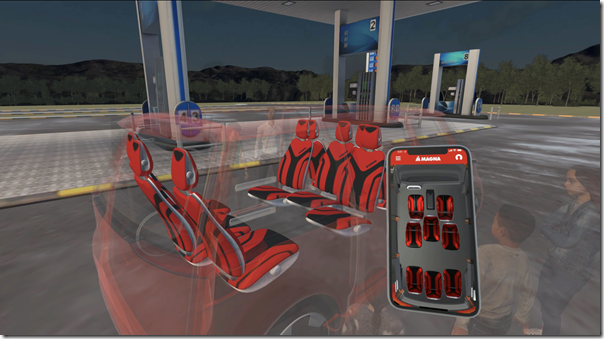 The Campfire setup. Seats are arranged via an app.

(One thing that Nardicchio learned, something he says he would have been unlikely to come to know without being on the ground, is that it isn’t unusual for three generations (grandparents, parents, children) to live together, and that the grandparents may be part of the vehicle purchase process. When the vehicle is full, the position of the grandparents is in the second or third row, so accessibility is paramount.)

Bisson says that there are three fundamentals of seating that they’re working to address: comfort, flexibility, and intelligence. And because no matter how cool the tech may be, there is also a recognition of another triumvirate: the tech must be efficient, affordable and global.

Magna engineers have developed a seating platform for vehicles—large SUVs and minivans, in particular—that permit reconfiguration of the seating depending on use cases.

There are three basic positions: cargo, campfire and conference.

All three are based on long rails in the floor of the vehicle that allows the seats to move into various positions. And the seats themselves also have actuators that allow them to be reconfigured. For example, in a vehicle that’s used for on-demand transportation, in instances where there aren’t passengers to be picked up, it may be cargo. So the seat cushions can fold up to meet the seat backs and the seats can be positioned to open up areas in the vehicle for goods. 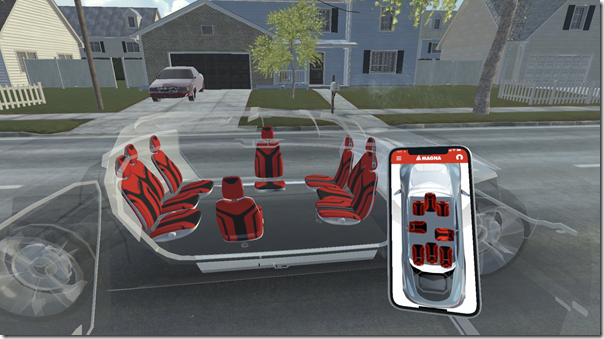 The Conference configuration. When you can’t get to the office for the meeting, bring the meeting along for the ride.

The campfire is thought of in the context of a family road trip. The seats can be repositioned within the confines of the vehicle and swivel so that people sitting in them are face-to-face. (Obviously, the driver is looking out the windshield unless the vehicle is stopped.)

Then, as one of the notions of autonomous vehicles is that people will spend more time working, the conference seating has the seats arranged within the vehicle as if there is a conference table in the center.

Magna has some deep knowledge of repositioning seats. For example, back in 2004, when the Chrysler Town & Country was launched, one of the features that was available for the minivan was Stow ‘n Go seating, which allowed the seats to be submarined into the floor. Then, in 2008, the Swivel ‘n Go seats were offered in the Town & Country. Clearly, the company knows not only seats, but how to move them in space.

Bisson notes that Magna is working with an airbag supplier to work out the issues that are related to repositioning seats as in the campfire and conference room configurations.

Bisson also notes that while new mobility scenarios bring into play such things for seating as wellness (the seat monitors one’s health) and entertainment (capabilities like individualized, localized audio), safety is still the paramount consideration.