Forward, fold, flip—Magna seating engineers just keep making it easier to get in and out of vehicles
#Dodge #Chrysler

Magna has been doing all manner of seating origami since 2004, when the Stow ‘N Go seat for the Chrysler minivans. Then MY 2008 minivans were offered with the Swivel ‘N Go system. And for the last 16 years they’ve continued to work on how to make ingress, egress and packaging better for vehicles that have third rows, minivans or SUVs. (The Stow ‘N Go, incidentally, is on its fourth generation.) 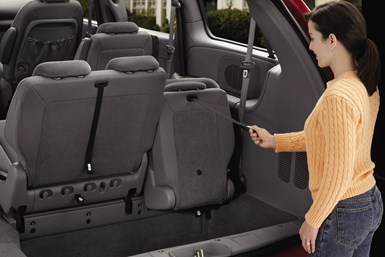 Magna has had a mechanical pitch slide seat for the past few years which, as its name implies, pitches forward toward the first row seat as it slides forward to provide more space for getting into the third row.

Now the company has introduced what it calls the “Next Gen EZ Entry Seat.”

Not only is this better for people who have to deal with second and third rows in their driveways, but it also provides advantages for interior designers and manufacturing personnel.

When you need the second row to be flat, too. (Image: Magna)

The seat is designed so that it is thinner than second row seats ordinarily are and provide the ability to increase the width of the cushion by up to 75 mm. Another design benefit is that Magna’s Freeform molded trim technology can be used for the seat, which also simplifies assembly and contributes to higher levels of craftsmanship. One question this seat answers: Why don’t second row seats look as good as those in the first? (Image: Magna)

The striker and latch are removed from the seat track, which increases foot clearance by up to four inches to the third row.

The locking mechanism is relocated under the seat cushion. Two power or manual disc recliners can be placed at any of the four pivots to lock the cushions.

The new pitch slide system has five links rather than the current generation’s nine links. That reduction, along with the removal of the striker and latch, provides a 2.9-kg weight save for the seat.

Another thing the seat does is have a fold and dive function. What this means is that when, say, in an SUV when the third row is folded flat, the second row can fold flat, as well, so there is surface for improved cargo carrying.

Of course, the Next Gen EZ Entry Seat wouldn’t be complete without an app. So it has one that allows adjustments of the pitch, recline, and forward and backward motion.