No, this is not some far-off future, but at the start of the next decade
#Magna #Fisker #Jaguar

The future—and not-to-distant future, at that—is hydrogen. As in one-million hydrogen vehicles being produced annually. By 2030

That’s according to external research as well as discussions with OEMs, says Frank Klein, president, Magna Steyr, the contract manufacturing business of the global supplier. 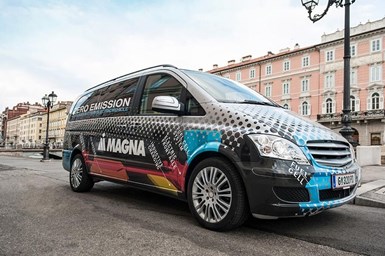 Klein estimates that about half will be consumer vehicles and the other half commercial.

Klein says that there is a great impetus on the commercial side, given regulations that are being established in municipalities. He points out that for “last mile” deliveries, for example, there is trend at present—one greater than in passenger cars—for electrified vans. He thinks that going toward the end of the decade, “hydrogen power will be a valid alternative.”

However, in the meantime, the company is doing more work in the area of battery electric vehicles.

It has been producing the Jaguar I-PACE since March 2018. (They are also making the E-PACE, the internal combustion engine SUV, in Steyr. Klein says that they make both the vehicles on the same line, in mixed-lot production, and that the takt time for the vehicles are the same. He says that the notion of a electric vehicle being much simpler and quicker to build isn’t the case unless the propulsion system manufacture is taken into account, but as they simply install it, assembling all of the components that make up an SUV takes the same amount of time.)

And it is going to start work on the engineering of the Fisker Ocean BEV SUV this month, with the planned production launch of the vehicle in Q4 2022. Klein says that it hasn’t been determined whether the vehicle will be produced at the Steyr plant or in a facility in Slovakia (assuming that that facility is built-out for full production, which will occur, yet the timing has yet to be firmed up). The platform for the vehicle is one developed by Magna.

On the subject of platforms, Klein says that going forward for EVs there will be more sharing among OEMs. He explains that when he was growing up the big differentiators were whether the engine had 4, 6 or 8 cylinders, as well as how well the vehicle could go into and out of corners.

Now, he suggests, with electric vehicles, those things aren’t as important as differentiators such as the overall customer experience with the vehicle—things that aren’t necessarily predicated on the power and dynamics vs. integration into the driver’s digital life. 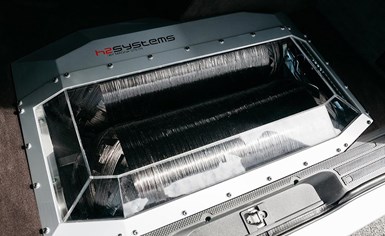 On the subject of expanding its capabilities beyond Europe and China, Klein says that they are looking at North America, but points out that they’d want to have at least two customers signed up before making a commitment to a production operation.

Klein says that based on the company’s capability to design, engineer and manufacture, as well as its experience having built some 3.7-million vehicles that were ordered by 10 different OEMs, it is attracting not only traditional OEMs, but startups that aren’t necessarily interested in establishing a production footprint.

As for the hydrogen future, Klein points out that Magna has energy storage systems expertise—that includes hydrogen fuel tanks.

The company will clearly be ready to meet what could be a big demand come 2030.