You may be surprised at how you can achieve output, quality, and energy savings in machining operations.
#Bosch #DMGMORI 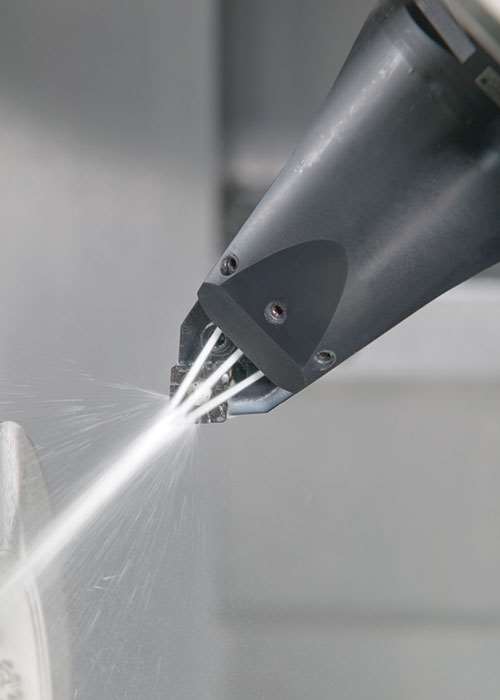 Although the cutting fluid system may not seem to be a major factor in terms of energy use, an industry- academic research project found that by adjusting the amount of fluid pumped during a machining operation, there can be a considerable effect on the overall energy consumption of a machine without having a deleterious effect on part quality or productivity.

Germany has a plan—called “Energiewende”—which calls for  a 20% reduction in energy use by 2020 compared with energy use  in 2008. Then it is a reduction of  50% by 2050. Realize that Germany  has no intention of no longer  being an industrial economy during this period.

So what this means is that industries have to pay more careful attention to their energy use.

According to the Institute of Production Engineering and Machine Tools at Leibniz Universität Hannover (ifw.uni-hannover.de),  the industrial sector accounts for  42% of the total electricity consumption in Germany, of which, about 25% is used to power pumps.  Drilling down a bit more, for machine tools, 24% of the total energy consumption is for the cutting fluid system.

They tested turning, milling and drilling operations, assessing the correlation between the volume flow of fluids and tool life. They concluded that there is an optimal flow rate based on the tool, the operation and process parameters.

So, for example, in an external cylindrical turning operation that was run at vc = 150 m/min, ap = 3 mm and d = 0.25 mm. The flow was adjusted from 2.2 to 6.8 liters/ min. And the determination was made that the optimal rate of flow is 4.5 liters/min, and that by using that setting, the amount of power required by the pump is 67%, without having a negative impact on tool life.

Other tests were conducted on rough  and finish milling, with adjustments made to the energy supplied to the  pump. In one test, they were able to  reduce the overall energy consumption of the machine by 37% without  sacrificing part quality or productivity.

Evidently, even if a company isn’t machining parts in Germany, there is a huge advantage that can be realized in energy use reduction by paying attention to details, like the amount of fluid flow used during machining.