While driving is associated with putting things like particulates in the air, a German company that specializes in making filters is testing technology that can actually allow vehicles to help clean the air.

MANN+HUMMEL is testing a vehicle that is equipped with a fine dust particle filter that is mounted on its roof. This filter separates particulate matter from the ambient air, such as those produced by fuel combustion. So by driving along, those particles are trapped by the filter. They’ve run computer simulations that show that the filter can fully offset particulate emissions from a given vehicle. (Presumably this means that if every car had such a filter, then the air would get a good scrubbing.) 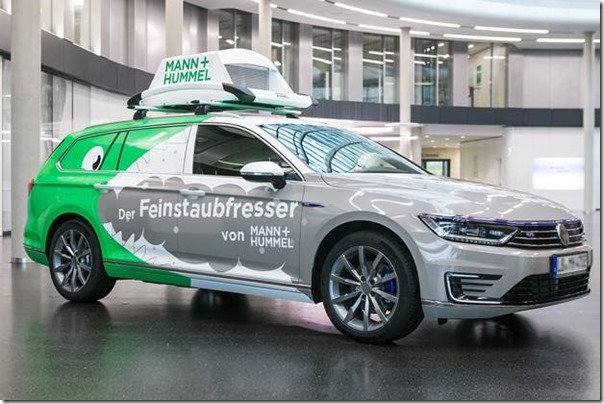 They’re also fitting the vehicle with a brake dust particle filter to capture the particulates that come off of brake pads during braking. This can be a particular problem in cities where there is a lot of stop-and-go traffic.

MANN+HUMMEL is located in Ludwigsburg, Germany, which is due north of Stuttgart. According to the company, in 2016 there were fine dust alarms raised for 59 days in 2016, and from January to April 2017, the alarms occurred 48 days.

Clearly, something needs to be done about that dust. And der Feinstaubfresser (the Fine Dust Eater) could be just the solution.