It’s “everything you want from an ERP system without the ERP.” It’s Facebook-meets-manufacturing. 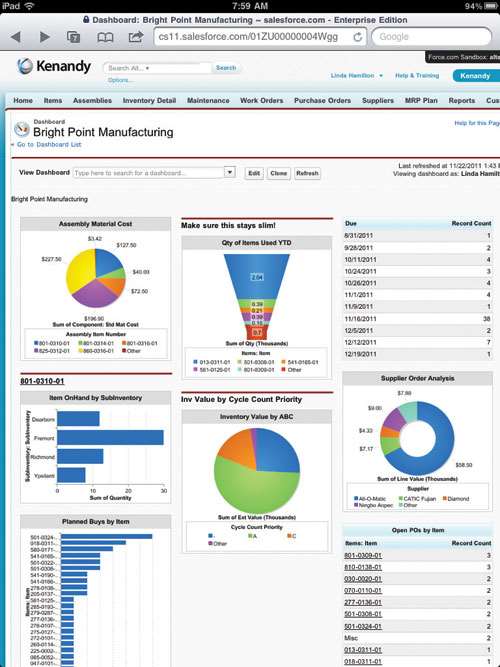 All dashboard data in Kenandy are linked to the underlying reports and data objects. This way, detailed information on work orders, purchase orders, BOMs, and other data objects is often only a couple mouse clicks away.

Users don’t need to plan for system and database capacity because Kenandy is built on a cloud computing system. Compute resources are available on demand. This plays out in several areas. For instance, Kenandy can support an unlimited number of levels in indented BOMs as shown here, and MRP runs can be initiated at any time.

Here’s an example of all the information about an object consolidated on a screen. From this Work Orders (WO) screen, a user can print picklists, kit/dekit WO, and perform other tasks online. By using the application on an iPad or other mobile device, users can operate paperless stock rooms, recording items pulled or shortages right into the system.

“The promise of ERP was that you were going to learn how to structure and manage your business. Unfortunately, something got lost in the translation. A lot of people found a whole generation of ERP systems incomprehensible.” So says Rod Butters, chief marketing officer of Kenandy, Inc. (kenandy.com). He, with Sandra Kurtzig—yes, that Kurtzig, the former CEO and chairman of ASK Computer Systems, which produced Manman ERP back in the 1970s and 1980s—debuted in September 2011 a “next-generation” manufacturing management software: cloud-based ERP that promises to be easy to install, easy to use, and includes next-generation social networking tools. (“Kenandy?” Kurtzig—founder, chairman and CEO—named the company after her two sons, Ken and Andy.)

Kenandy has “everything you want from an ERP system, but without the ERP,” says Kurtzig. Obviously, explains Butters, “We have software and obviously we have ERP functionality, but it’s without all the ERP headings. We’re not implementing the vast, integrated pile of stuff that other ERP systems have accumulated. We think nobody ever uses all that stuff.”

At the core of the Kenandy Manufacturing Cloud is traditional ERP functionality: inventory management (including subinventory management to support distributed operations); engineering management (such as bill of materials); production (i.e., work order management.); purchasing (including support for a range of order types and terms); and resource planning. The type of company that they think the package is best suited for is in the $15-million to $300-million range. (Yet while interviewing Kurtzig and Butters, a bell rang in the distance. Kenandy had just made a sale—to a $500 million company.)

This conventional ERP stuff is combined with the capabilities of social networking, mobile computing, and scalable worldwide, multi-lingual software deploy-ment. All in the cloud. Specifically, on the Force.com enterprise cloud computing system from eponymic Salesforce.com. Call it a “social manu-
facturing” platform. Or call it, says Kurtzig, the next wave of cloud applications where social media and multi-tenant systems combine with core enterprise application functionality to replace time-worn ERP systems developed decades ago.” The software is always up to date, doesn’t require costly maintenance upgrades, and doesn’t involve the complexities of computer servers, software, and distributed communications. Subscriptions cost $150/user/month. (Minimum 10 users; paid in advance.)

Cloud computing itself solves another problem inherent in last-generation ERP. Kurtzig posits that today’s manufacturing companies have moved from vertically integrated operations, where the company did and made everything to make something, to global, horizontally integrated operations, where different companies, suppliers, and partners of some sort work together to make that something. The problem, she says, is that ERP has not made that transition. Cloud-based ERP has, though, by virtue of its ability to be accessible to any subscriber with a computer running a web browser.

Cloud is not the only new feature in Kenandy. It’s so intuitive that people can learn it in a few hours—without reading a manual. (The company has yet to finish writing a user manual.) The system is straightforward and hover-over help is available for every data element that appears on a screen in Kenandy. From those data elements, users can quickly drill down for more data. A single screen display accesses purchase orders, line items, and approval information. This display makes it easy to create, update, track, and close purchase orders, convert MRP-planned orders and miscellaneous purchase requisitions into purchase orders, and maintain supplier information.

The “social networking” in Kenandy comes via Salesforce Chatter, a private, secure, social network. Think Facebook. For businesses. Chatter includes the ability to create user profiles for colleagues to know each other, create public or private groups for working as teams on projects, and share large files from the browser. Customizable feeds and dashboards display relevant and current information, including status updates and customer information. The latest version of Chatter furthers collaboration by being “open” enough for users within the enterprise to invite people outside the organization, even though they’re not using Salesforce. Another version, Chatter Desktop, lets users post updates, comments, files, and links without using a browser. Chatter Mobile runs on Android, BlackBerry, iPad, and iPhone.

Chatter doesn’t just replace hundreds of emails in an inbox with hundreds of tweets, instant messages, and walls. “The cool thing about Chatter,” says Butters, “is that information gets organized along the problem. You end up with unstructured information getting, in a sense, structured by the information it’s associated with.” In practice, a designer won’t have to pore through a mountain of tweets when searching for all the information about a particular part. Clicking on that part returns all the drawings, revisions, tweets, data analysis, vendor information, and so on about that specific part, regardless of data source and creation date. This approach makes it “easy to draw other people into a conversation and keep it relevant,” continues Butters. “It’s also easy for people who aren’t in the conversation to follow the things they have an interest in, and to be able to see when things come up.”

And now a word from the competition

Kenandy joins a short list of vendors offering manufacturing-oriented ERP through the cloud: Epicor, Infor, Plex Systems, Rootstock, SAP. Mark Symonds, CEO of Plex Systems (plex.com), is not bothered by the new competition. “Workday and Netsuite have proven that companies will put sensitive financial and human resource data in the cloud. With so few providers of software as a service [SaaS] ERP for manufacturing, many analysts and investors assume that the customers are just not ready. That’s not the case at all. I welcome a new competitor wholeheartedly. It is yet another signal that SaaS will make enormous inroads in the coming years, displacing the aging on-premise solutions of the 80’s and 90’s.”