Mark Fields, former president and CEO of Ford and present senior advisor at TPG Global, thinks that unlike other industry analysts, the decline of U.S. automotive sales in 2020 as a result of the COVID-19 pandemic won’t be quite as severe, with his crystal ball indicating that the fall off will be in the nature of 15%. 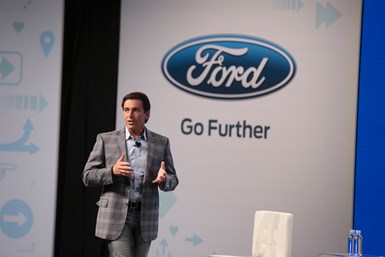 Fields, back in the day at Ford. (Images: Ford)

Fields, speaking as part of the Automotive News Congress Conversations , said he felt that in the short term, the fact that vehicle sales have been opened up in all 50 states as of the third week of April is allowing those who had pent-up demand in March and earlier in April to get to the showroom. What’s more, “From an incentive standpoint, it is a great time to buy.”

In the medium term he thinks that personal vehicle sales will benefit from the fact that there is a high likelihood that people may become less comfortable in planes and trains and consequently one’s own vehicle will be like a bit of PPE gear (without the awkwardness of a face mask).

And going to the medium-to-long term (as in the Fall), he thinks that it will be necessary for the Federal government to step in to provide some sort of support for the industry—some variant, perhaps, of “Cash for Clunkers.”

Fields pointed out the importance of getting auto plants up and running because of the impact on the overall economy: there are 10 million people directly involved in the industry, then there is the trickle down from that, providing a multiplier of 9 or so. Those numbers are non-trivial regarding getting the economy going again.

Caution About the Return

Yet he had some cautionary notes. For one thing, he pointed out that some suppliers may have cashflow problems, and if they’re not able to provide parts, this can shut down assembly plants.

Another issue is that an assembly plant may be in a state that has been opened up and the supplier in one that is still closed.

In the plants, Fields said that there need to be significant changes in order to protect the health of workers. This will range from testing (he suggested this will probably take the form of temperature monitoring given the number of people who work a shift: otherwise they’d be in line for hours before they got to their stations) to hygienic protocols ranging from tool handling to staggered lunches.

Fields said that the startup is likely to be slow for a number of reasons, and likened the situation to cooking on an outdoor grill: You have to start the charcoal and let it come to temperature before you can start cooking with it. “You want to ensure the workers are safe and the vehicles are coming together in a quality fashion.”

He said that while absenteeism in a well-run plant is usually on the order of from 2 to 4%, this may be a challenge at the ramping up of production. On the one hand, there are older employees who may feel more at risk from the virus and not come to work. On the other hand, there are people with young children who are not going to school and even as we move into the summer and they’d be out, there may not be open camps or other facilities to take care of them, so those workers may not come to the factory.

As for what he thinks regarding the future of electrification and autonomy, Fields said that at the end of the Great Recession companies had to make decisions about where they’d make their continued investments and whether they’d go it alone or work with another automaker. He said that that is likely to be the case again.

He said that electrification “has a bright future” in the industry, but that it is suffering a bit of “collateral damage” from COVID-19 in that consumer purchasing power is diminished so the cost advantage of internal combustion engines (ICEs) is more relevant. Gasoline prices are exceedingly low, so there is another advantage for the ICE. And as many electric vehicle sales are predicated on government incentives, and most governments at all levels are presently spending a lot of money on keeping the lights on, those incentives are likely to dwindle.

He thinks that OEMs will continue to invest in electrification. “They may pare back, but they will not walk away.”

Autonomy? Not as positive.

Fields said that right now no one really has a business model that will show how autonomous vehicles will earn money or even cover the capital spent.

In this case, he thinks that it is likely that more companies will collaborate so that they can share the costs, leverage the important human resources needed for development, and be able to help direct the development of standards.

Fields is confident that the industry will be back. “This is the umpteenth big disconnect the industry has dealt with in the last 100 years.”