In late January General Motors announced the creation of its car-sharing service, Maven. While the service is still modest in scope, yesterday GM announced that Maven customers have racked up more than one-million miles in the comparatively short period of time between now and then, which is all the more impressive when you take into account the fact that it started in Ann Arbor and New York City, and is just now expanding to Chicago, then Boston and Washington, DC by the end of June.

It is really a compelling proposition. For example, the setup in Chicago includes Maven City. In this program, vehicle prices start at $8 per hour—and that includes insurance and fuel. However, you’ve got to walk before you run, so the number of vehicles available is just 30, which will be located at various sites around the city. 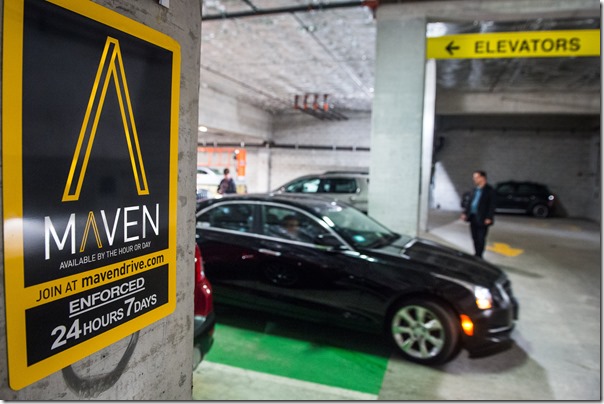 This is a membership model approach, but note that the people who use the service in Chicago or elsewhere need a license (and a smart phone), of course, but they don’t need to own a car.

Isn’t GM a vehicle manufacturing company? That may, by and large, be its business, but the company leaders also recognize that there is a change aborning in this whole mobility space and they’re either going to be a part of it—and not just a part that builds and sells the vehicles to others—or they’re going to be watching companies like Uber making money off of those vehicles. (I would have written “Uber and Lyft,” were it not that GM also made a $500-million investment in Lyft, so it is in that ride-hailing part of the transportation services business, too.)

One somewhat curious aspect of Maven is that in Chicago they are also offering Maven+, which is dedicated to residents of a luxury high-rise apartment community, Aqua, which is the Lakeshore East neighborhood.

And when it opens in Washington, there will be Maven+ at the Hepburn, a 195-unit luxury apartment complex on the grounds of the Washington Hilton.

In both cases, one might think, that these would be prime buyers of Cadillacs, and given Cadillac’s recent sales numbers, it can use all of the luxury customers it can get.  (It is worth noting, however, that Cadillacs are in the Maven fleet, so perhaps the use of a Maven Cadillac could be something of an extended test drive.)