The second-generation Mazda CX-5 was introduced at the L.A. Auto Show on November 15. Mazda announced that the vehicle went into production at the Ujina Plant No. 2 in Hiroshima on November 27.

The vehicle will launch first in Japan, in February 2017. 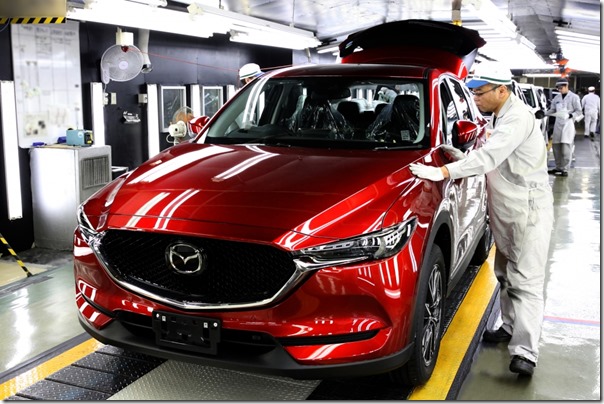 Start of production for the first-generation model was in November 2011. In April 2015 it reached a cumulative 1-million units, which made the crossover the second-fastest Mazda to hit that number, with the Mazda3 taking first place.

Through October of this year Mazda has produced 1.57-million CX-5s.

For the 2017 model, one of the most notable features is what is supposed to be launched in the second half of next year in the crossover: the SKYACTIV-D 2.2 engine.

That’s “D” as in diesel. Yes, long-promised, but Mazda says that this time the diesel will be coming to the U.S. market in the second half of 2017.

As Masaya Kodama, program manager for the CX-5, describes the new car, its development and production, “There is something unique about the way Mazda makes cars, with an abiding thirst for challenge and uncompromising convictions about how vehicles should be engineered and why. I believe that this is the path we were destined to follow. I also believe that the all-new CX-5—born of a desire to provide every driver and their passengers with driving pleasure and a deeper relationship with the car—will delight customers and enrich their lives.”

That’s a lot for a compact crossover to carry.