McLaren Automotive is busy building—hand assembling at its McLaren Production Centre in Woking, Surrey, England—members of its Longtail (LT) vehicle lineup, including the new 600LT Spider. 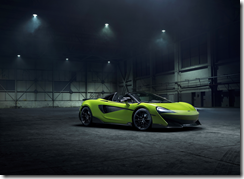 Ordinarily, even though convertibles don’t have the mass of a roof they weigh more because the roof provides structure to a vehicle, and so without it, it is necessary to provide some additional members to provide strength.

But as Mike Flewitt, McLaren Automotive CEO, points out: “Taking full advantage of the strength of the carbon fiber MonoCell II chassis has ensured that the new Spider has dynamic abilities and performance on part with the 600LT Coupe. . .with no additional structural strengthening required.”

In other words, the composite structure is sufficient to handle the loads that a vehicle that has a 592-hp, 457 lb-ft twin-turbocharged V8.

As you probably note from the picture, the roof is not a fabric material. And it is raised and lowered via a pushbutton, which means that there are additional mechanisms required to raise or lower the three-piece hardtop, which undoubtedly accounts for some of the 50 kg mass.