Every McLaren produced since 1993 has had a carbon fiber chassis.

For those who are getting the McLaren 620R—a limited production vehicle (225 will be built)—who want even more carbon fiber for their vehicles, know that for those customers in Europe, the Middle East and Africa McLaren Special Operations (MSO), the “bespoke” division of the company, is offering what is called the “R Pack” for the vehicle. 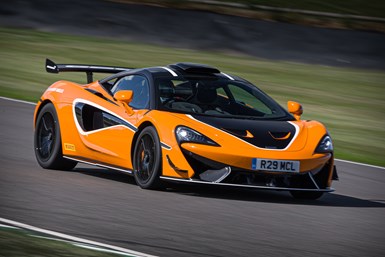 When you need for advanced materials for your supersports car, McLaren has it. (Image: McLaren)

This brings, for example, the “Gloss Finish Visual Carbon Fibre Roof Scoop”—a fully functional air intake system for the 611-hp 3.8-liter, twin-turbo V8 inspired by the McLaren F1 Longtail. (For those who want visual documentation of their drives, there is an optional camera that can be fitted to the scoop that works with the McLaren Track Telemetry system.)

But it isn’t all carbon fiber—or fibre—because there is also the “MSO Defined Titanium SuperSports Exhaust.” One of the features of this system is that it is “up to 5 decibels louder than other Sports Series exhaust options and delivers a sharper and more characterful exhaust note.”

Apparently when you’re going to be going, say, from 0 to 62 mph in 2.9 seconds you want people to hear you coming.

Although this could be considered an innovation, the idea of the thing—with the thing being a 12.4-inch digital cluster for the 2021 Ford F-150 from Visteon—is as important. 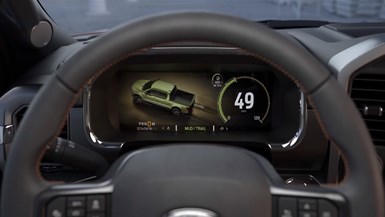 Look at the image on the screen and think about what you ordinarily see when you look at that space beyond the steering wheel: probably two large gauges—the speedo and the tach—and a rectangular space that includes information that might be navi details or the audio source.

But in this case there is, in the case of this screen shot (Mud/Trail mode), a truck-specific graphic that is more game-like than traditional truck-like. And know that as the driver goes through the various modes (e.g., Rock Crawl; Deep Sand/Snow) there are changes of image.

Moving to designs like this are undoubtedly more appealing to the people who are more familiar with seeing things on screens rather than physical analogue gauges. Which undoubtedly provides an advantage to Ford in the highly competitive pickup market.

(Incidentally: the aforementioned info like navigation and audio can be seen on the screen as desired, too.)