“Vehicle mass is the enemy of performance whether a car has a conventional internal combustion engine or a fully electrified powertrain, so winning the weight race is an absolute priority for us – and one of the reasons McLaren Automotive has invested heavily in the McLaren Composites Technology Centre, our own UK composite materials innovation and production facility.” That’s Mike Flewitt, CEO of McLaren Automotive.

How serious is McLaren about using composite structures? 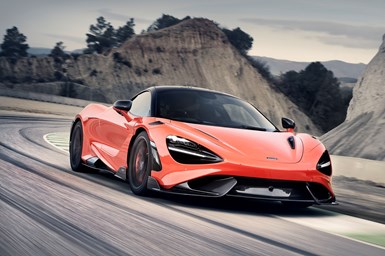 The McLaren 765LT goes from 0 to 124 mph in 7.2 seconds. It looks fast even standing still. (Images: McLaren Automotive)

Since 1981, when it introduced the MP4-1 Formula 1 car, every car it has built has had a composite chassis.

Of course, it is a manufacturer of supercars. Yet the same can’t be said by other OEMs in that rarefied stratosphere.

The objective is not to have a claim to fame. Rather, it is about reducing mass to increase vehicle performance.

Flewitt points to the new 765LT.

It has the company’s carbon fiber Monocage II structure. 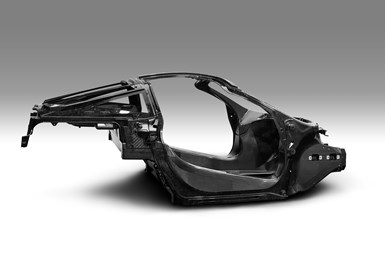 But that was deemed too heavy for the new car.

So among the things that contribute to a light weight for the 765LT are carbon fiber exterior body panels, aero kit, seats, and the center tunnel.

There are lightweight side windows and a polycarbonate backlight.

The exhaust system for the 765-hp twin, turbo V8 is made with titanium. That is a 40% weight save compared to a steel system.

The transmission is said to be built with “Formula 1-grade materials.” Presumably, that means “expensive.” 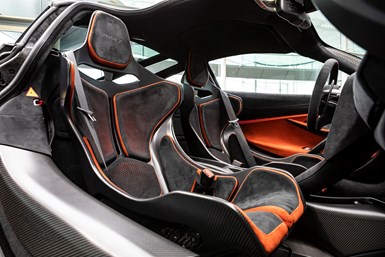 Even the seat structure is produced with carbon fiber.

For the track-tuned suspension they’re using “helper” springs rather than a heavier dual-rate setup.

Unsprung mass is minimized through the use of ultra-lightweight wheels, Pirelli P-Zero Trofeo R tires, and titanium wheel bolts: that provides a mass savings of 48.5 pounds.

For those who want them, there are an air conditioning system and an audio setup. And those are no-cost options for the 765LT.

So, what does all that do?

Composites Made for Road Cars

It is worth noting that McLaren Composites Technology Centre has heretofore been used to produce components for race vehicles. With the 765LT program, road car components are now being produced. 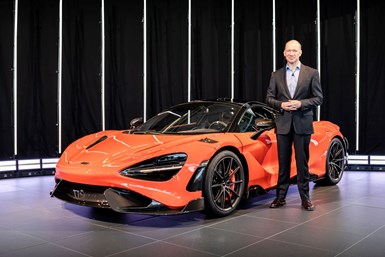 McLaren CEO Mike Flewitt and the 765LT.  Just 765 will be produced.

Looking ahead, Flewitt said: “Reducing vehicle weight is at the center of our strategy for the next generations of McLaren supercars. We are already class-leading and committed to further driving down weight in order to be in the best possible position to maximize the efficiency and performance of hybridized models to be introduced by 2025.”

By the way, they are producing 765 765LTs. (Presumably, the production number predicated the name—or vice versa. The “LT” is “Longtail.”

While pricing isn’t available at this time, odds are a car that looks like that and which can go from 0 to 124 mph in 7.2 seconds is one of those things to which the line “If you have to ask you don’t need to know” applies.