This, of course, is a boat: But it is not just any boat, it is the Cigarette Racing Team 50' Marauder AMG, introduced this week at the Miami International Boat Show.
#Mercury #Carbon #MercedesBenz

This, of course, is a boat: 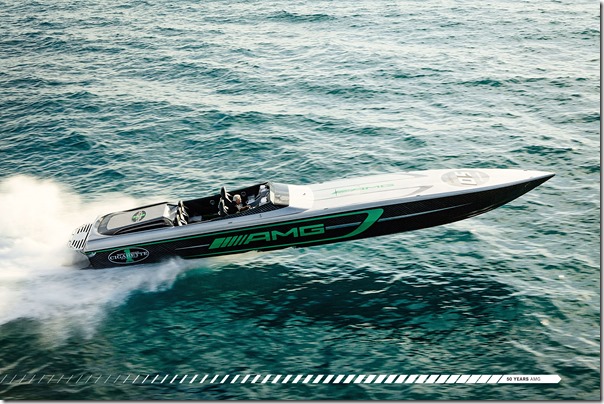 But it is not just any boat, it is the Cigarette Racing Team 50' Marauder AMG, introduced this week at the Miami International Boat Show.

When the boat’s Race Key fob is used and race fuel is in the tank, then the captain gets a boost of up to 1,550 hp. When the Pleasure key fob is employed and there’s 91 octane on board, there’s 1,350 hp.

And the boat is carbon fiber-intensive. The deck, cockpit and consoles are constructed with carbon fiber over a foam core. (Advanced laminate analysis techniques were deployed to determine the appropriate structure.) The engine hatch, also carbon fiber, was produced via vacuum infusion.

It has been determined that through the use of the material, as well as even paying attention to the weight of the boat’s electrical system (remember: wire in abundance, as is increasingly common in high-end boats like high-end cars, is heavy), they’ve been able to shed more than 1,300 pounds.

But why, you might be wondering, are we talking about a boat here?

Simple. Because the 2017 50' Marauder AMG celebrates 10 years of collaboration between Cigarette Racing and Mercedes-AMG. 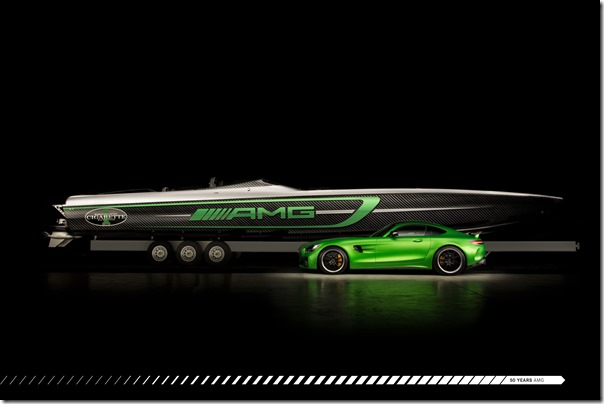 According to Gorden Wagener, chief design officer of Daimler AG, "The 2017 50' Marauder AMG is a particularly striking result of our continued collaboration with the Cigarette Racing Team, and a fitting tribute to honor 10 years of working together. One racing icon has inspired another, and we are proud to continue to set the benchmark and seamlessly combine design and performance both on land and on the sea.”

Wagener was deployed in designing the paint and the detailing for the boat. The color is “Green Hell Magno,” which is a reference to the Mercedes-AMG GT R.

The boat is one-of-a-kind.