It is hard to describe how large—more precisely, long and spacious—the Sprinter Passenger Van is in a meaningful way. It is not giant, massive. Not in Class 8 Freightliner territory. Not in Thomas Built yellow school bus terrain. But Daimler builds all three, the Sprinter, the Freightliner big rig and the daily student hauler, so know that it knows big. There is another vehicle under the Daimler umbrella that might be helpful in understanding the context of the Sprinter Passenger Van: 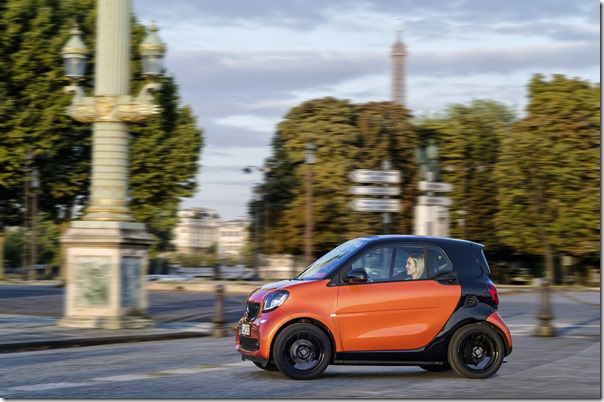 The smart is small.

As for large, consider the Sprinter Passenger Van in this context.

The fortwo is for two people: the driver and the passenger. And not much else.

The Sprinter Passenger Van seats 12 people. Yes, a dozen. Once there is the full complement of people on board, there is187.2-cubic feet of cargo room behind the fourth row. You could fit major appliances back there.

What is really somewhat bizarre about this vehicle is that—and remember, this is a Mercedes, badges affixed fore and aft—it has a surprisingly low MSRP for a vehicle with a six-cylinder diesel engine: $46,180. Not a bad price for an object that takes up 195,059 cubic feet of space in your driveway.

Also surprising is how easy it is to drive. With the width of 79.7 inches, it is actually narrower than a Ford F-150 (79.9 inches). So those who are comfortable driving a pickup should have no trouble at all driving the Sprinter Passenger Van.

However, the longest F-150 (Supercab with an eight-foot box) is almost two feet shorter (22.5 inches) than the Sprinter Passenger Van, so when it comes to backing in, there is a whole lot of truck back there. (This is a case where you want to opt for the Active Safety Plus Package w/Parktronic because cameras, sensors, beeps, and other elements that can make parking less onerous is helpful.) Bring your friends.  Eleven of them.

The vehicle, as mentioned, has a 3.0-liter, 188-hp V6 diesel. It is mated to a five-speed automatic. This is not the most advanced Mercedes powertrain, but it gets the job done, with the job being moving people and their goods with efficiency, not pulling laps at the Nurburgring.

And while it has high-capacity front and rear springs and shocks, again know that it is about having some payload on board (maximum, incidentally, is 2,368 pounds, so if you have a full complement of passengers and no luggage, know that if each member of the journeying jury weighs 200 lb., then you’re going to be above the legal limit (if each weighs 197 pounds, you’re good to go)). If you are driving solo and without stuff, know that the ride is going to be more than a bit jarring, jittery and noisy. Bring the posse.

To make it easier on them, the $935 electric sliding step is certainly an option you’ll want to opt for. As is the Rear Passenger Comfort Package, which puts an HVAC system on the roof of the van that is much larger than those I’ve had in apartments.

The Sprinter Passenger Van that I drove actually has an all-in price of a more Mercedes-like $63,150, but even that number needs to be put into context: I just checked the website of a local Mercedes dealer and discovered that the base MSRP for a 2016 E400 sedan with a 3.0-liter engine (albeit gasoline and 329 hp not diesel and 188 hp) is $63,100—and if you add in the destination charge of $925, that E400 is actually more expensive than the Sprinter.