“A dawn for a new era of our company.” That’s how Dieter Zetsche, CEO of Mercedes-Benz Cars, described the EQC at the vehicle’s official introduction at an event in Stockholm today. “It is the complete package,” he said, ticking of the boxes for design, usability, serviceability and convenience.

It is an SUV. An electric SUV. And so Zetsche also noted that it is “safe, silent and smooth.” 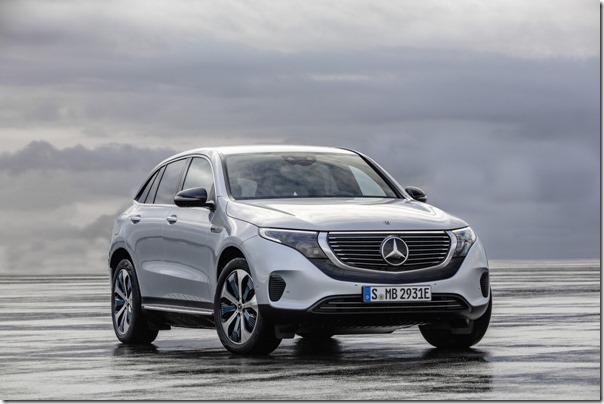 The vehicle, which is initially going into production at the Mercedes plant in Bremen, Germany—because Bremen is the lead plant for the C-Class and the GLC, and the EQC is based on the C-Class platform—will be built in Beijing next year.

Mercedes, which is in many ways tailing Volkswagen when it comes to proclamations regarding electric vehicles (VW announced earlier this year that it will have 16 plants producing battery-powered vehicles by the end of 2022 and will have the capacity to build three-million EVs annually by 2025, the year when there will be 80 new models on offer by the Volkswagen Group), notes that it can produce the EQC in six plants as of now: the two aforementioned, as well at Rastatt and Sindelfingen in Germany, Hambach, France, and Tuscaloosa, USA.

Battery production is performed by the ACCUMOTIVE Mercedes subsidiary in Kamenz. Mercedes is investing more than one-billion euros to build a network of eight battery plants—five in Europe, two in Asia and one in the U.S.—because as the company put it, “While the combustion engine is the heart of the conventional powertrain, the battery is the heart of the EQC and the EQ models that will follow.” (EQ is the company’s nomenclature for electric vehicles., with just “EQ” being full EVs, “EQ Power” for plug-in hybrids and “EQ Boost” for 48-Volt mild hybrids.) There are two motors, one on the front axle and one on the rear. The former is setup for low- to medium-load conditions; the motor on the rear axle adds, well, more oomph! The total output is 402 hp and 564 lb-ft of torque. No word on the overall mass, but it must be a bit on the heavy side as the 80-kWh lithium-ion battery is said to provide a range on the order of 200 miles, and the top speed, that 402 hp notwithstanding, is just 112 mph (electronically limited).