Looking for a way to get people behind the wheel of its vehicles in something of a curated manner, MINI has developed a clever ride-and-stay program for people in the NYC and LA areas via an arrangement with Airbnb.

For the East Coast there is a MINI Cooper S 4-door hardtop to take people to the Orchard Views from a Light-Filled Tiny Home with a Fire Pit in upstate New York for three-night bookings.

For the LA area its an “Off Grid Stargazing Cabin” in Twentynine Palms that is traveled to in a MINI Cooper Convertible.

In both cases the accommodations are, yes, mini. 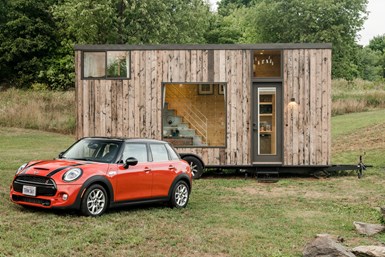 Drive a MINI and stay in a small Airbnb house. (Image: MINI)

As is another aspect of this limited-time promotion (bookings open September 10 at 1 pm PST and close when sold out): the charge is $1 per night (plus taxes and fees).

“While so many aspects of our lives have changed recently, getting away to enjoy the twists and turns of the open road in a MINI remains as fun as ever. That’s why teaming up with Airbnb is a perfect way for us to help people escape for a few days and relax at one of these two properties which come with a MINI to help enhance the experience,” said Rah Mahtani, Marketing and Communications Manager for MINI USA.

Innovation: A Digital Twin for Tokyo

While there is increased on-road testing of autonomous vehicles (AVs), there is still a significant amount of simulated testing going on, especially in places where it might be somewhat demanding for an AV to contend with.

So to that end, a 35-km section of Tokyo’s Shuto Expressway, Inner Circular route, has been modeled by rFpro, a simulation software firm. 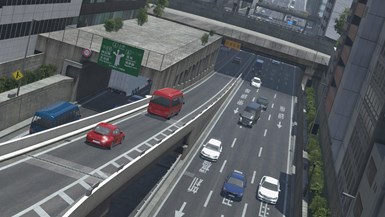 A digital twin of a Japanese highway for AV development. (Image: rFpro)

According to the company, it is “the highest accuracy digital twin” created of the roadway. Using survey-grade lidar scanning, there is a surface that is accurate to within 1 mm, which means that every drain cover and expansion joint is part of the digital twin.

In addition to which, the model contains road signs, markings, and roadside objects, each of which is classified.

According to Matt Daley, rFpro managing director, “The C1 route is one of the most challenging stretches of city roads in the world for an autonomous vehicle to navigate. With constantly changing road curvature and elevation, complex and densely situated junctions and a huge array of road signs and markings, it is the ultimate test of autonomous vehicle technologies and is the perfect way to exercise and develop such capabilities safely.”

The digital twin allows the creation of multiple scenarios including the amount and types of traffic.

Daley: “Collecting the volume and variety of training data needed for this type of road network would be very expensive, time consuming and potentially dangerous in the real world. Our model of Tokyo’s C1 brings this highly complex road network to development engineers and researchers, wherever they are in the world.”