While some OEMs talk about developing vehicles for the whitespace between segments, MINI is finding niches that others don’t seem to perceive.
#BMW #MINI #HP 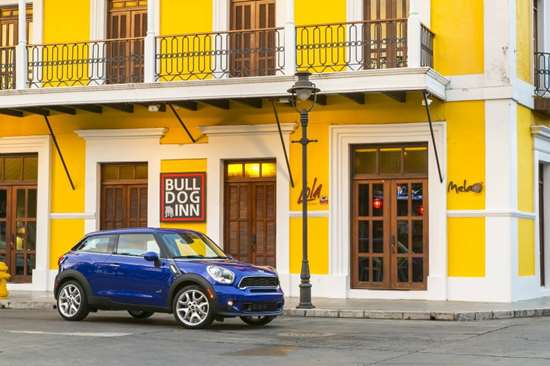 Inside: circles and ellipses and arcs abound. It is evident that everything was not only carefully designed, but designed contextually, such that it all fits. (This is the interior of the John Cooper Works variant.)

Two big (well, in the MINI world) design changes are effected on the Paceman: one is a more horizontal orientation of the taillights. The other is the nameplate on the back of the car.

Way back in 2002, MINI managers and marketers pulled out their spreadsheets and calculators and reckoned that in the U.S. market they’d be able to hit sales of 20,000 per annum.

Of course, they started with one model.  The Hardtop.  Which continues to top its sales.  Funny thing about that car, notes Patrick McKenna, MINI manager of Product Planning and Motoring Events (and clearly that’s a funny title, as well).  For a typical car, he –and this has to most certainly be the case for a car that (a) is small, (b) has a fanciful design, (c) is a two-door—says that it is usually described by a sales cycle that resembles an inverted V.  Year two is when it hits its apogee.  Then down it goes until it is gone from the market.

Another slight subversion: the proliferation of models.  With the addition of the Paceman, the company now offers seven variants.

One more thing.  Not all of the MINIs are produced in England.  The Paceman (R61) and its platform mate, the Countryman (R60), are produced at the BMW plant in Steyr, Austria.

The Countryman (the fourth MINI iteration) is positioned as being something of what is in BMW-speak a “sports activity vehicle.”  Think of it as a small crossover vehicle.  Consequently, the Paceman, given what it is based on, is a “sports activity coupe.”  Two doors.

And while the two cars are close, there are dimensional differences, as well as the number of doors.  That is, the Paceman is 162.2 in. long, 70.3 in., wide, 59.9 in. high, and has a 102.2-in. wheelbase.  The wheelbase is the same for the Countryman.  But it is ever-so slightly different in terms of the other dimensions—161.8 in. long, 70.4 in. wide—with the exception of the height, which is 61.5 in.  Remember, the Paceman is designed to be coupe-like, so part of its design difference is a roofline that sweeps back and downward toward the standard rear spoiler.

The front end of the car is unmistakably MINI, with the upright hexagonal grille flanked by the large headlights that are pulled back into the front shoulders. Around back there is a change for MINI.  For one thing, the taillights have a horizontal orientation, not the vertical that is characteristic of the other models. For another thing, the letters PACEMAN are positioned just below the MINI badge; it is the first in the line-up to have a rear nameplate.

Inside the four-seater, the variations on a circle—including ellipses and arcs—abound.  A design change that MINI partisans will probably find as profound as the nameplate is that the window controls are located in the door trim, where the window controls are generally found in vehicles that aren’t MINIs. (Historically the switches are low on the centerstack.)  One interesting aspect of the interior is the positioning of the front seats, which are slightly elevated compared with those in the rear; the objective here is to provide greater outward visibility for those in the front.

Because this is an “activity coupe,” it is available with an all-wheel-drive system, ALL4.  This system uses an electromagnetic center differential.  Its control electronics are integrated with those of the car’s dynamic stability control system.  Depending on tractive conditions, it can send as much as 100% of the engines power to the rear wheels in milliseconds.  In ordinary conditions, the split is 50/50.