MINI MINI Cooper SE: This Car Will Make You Smile

This is the cutest electric car you will ever see.
#MINI

The pictures don’t do it justice.

Go to your nearest MINI dealer and hope that they have one. It will be worth the trip. 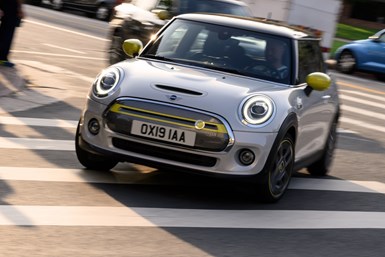 The vehicle as-driven was White Silver and with the bright green accents on the grille and the side mirror caps, in particular, it made the diminutive two-door (151.1 inches long, 68 inches wide, 56.4 inches high, and a 98.2-inch wheelbase) almost seem like a toy, which is probably a term that MINI would prefer not to be ascribed to this vehicle, but I mean that in a way to bring up the notion that this is a car that makes you smile like a little kid who has gotten a new thing to play with.

Yes, this is a car with all of the big-boy amenities, from LED lamps all around to Apple CarPlay.

It has a front-drive electric motor that provides 181 hp and 199 lb-ft of torque. There is the ability to adjust the driving performance for economy, normalcy or sportiness. 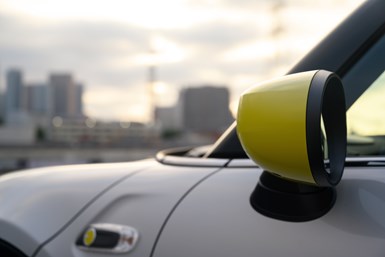 It is something of a Goldilocks scenario, with the first being a bit too sluggish, the last-named peppy (the vehicle can apparently go form 0 to 60 mph in 6.9 seconds and has a top speed of 93 mph) but really makes that 110-mile EPA range go WAY down quickly, and the normal setting, well, normal.

The MINI Cooper SE has two types of cords, the “occasional use” and the “TurboCord.” The first is for plugging into a 120-V outlet, probably at home, as it will take 24 hours to fully charge the lithium ion battery. The TurboCord can be used with a 240-V outlet (or the 120, too). With 240 V, the vehicle can be charged in about 8 hours.

MINI recommends that a 32-amp Level 2 home charger be installed at one’s residence. That brings the charging time to about 4 hours, the same amount of time as is the case of an AC Level 2 public charger. The system can also be charged on a public DC rapid charger, 50 kW maximum, to 80% state-of-charge in about 40 minutes.

Let’s face it: The MINI Cooper SE is rather impractical for many uses that one has for a car. But let’s also face it: If practicality was the metric by which we lived our lives, there would be plenty of things that we would not have (from high heels to endlessly replaced iPhones).

What is the value of charm in the auto industry?

That’s the question that this car seems to raise.

If you’re the sort of person who names their car and accessorizes it on the inside to truly make it “yours,” go look at this car.

It will do—mainly—what you need to get done, assuming that what you do is take short trips and don’t buy a lot of stuff that would require cargo capacity.

But what it will really do is provide a smile every time you see it.