Researchers are using V2X communications and other methods to provide vehicles with a significant increase in fuel economy.
#GeneralMotors #Chevrolet #oem

Imagine being able to achieve a 20% energy save in a vehicle without having to do something extraordinary like manufacturing it out of comparatively expensive material and/or having a radically different powertrain setup. That is something that Chris Morgan, a research engineer and manager of the Michigan Technological University (MTU) mobile lab, says that they’re achieving in their work on the U.S. Department of Energy’s Advanced Research Projects Agency-Energy (ARPA-E) NEXTCAR program.

NEXTCAR, too, is an acronym: NEXT-Generation Energy Technologies for Connected and Automated on-Road vehicles. According to the program overview, “The overall objective of the NEXTCAR Program is to develop optimized, coordinated vehicle dynamic and powertrain (VD&PT) control technologies that will improve the energy efficiency of each individual vehicle in the future automotive fleet, by utilizing emerging technologies and strategies in sensing, communications, connectivity, information, decision-making, control and automation. In essence, the co-optimization of vehicle-level (vehicle dynamic) and powertrain-level operations is sought in order to maximize future reductions in vehicle energy consumption.”

The goal is to get a cost-effective solution for improving the fuel efficiency of passenger vehicles and medium- and heavy-duty trucks. 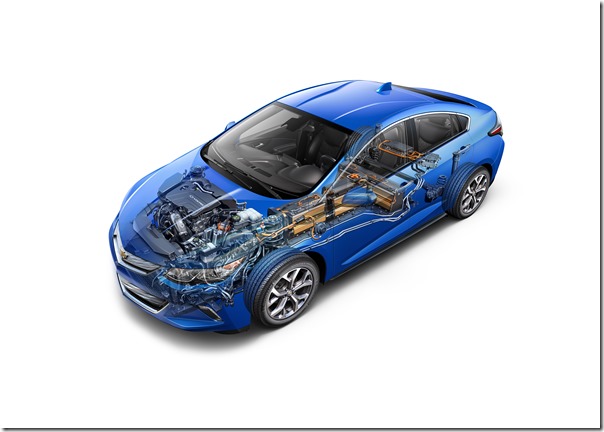 MTU researchers are working with eight Chevy Volts in their NEXTCAR research. According to Dr. Jeff Naber, the extended-range electric vehicle architecture is useful because the drive modes allow the researchers to analyze varying conditions as they work toward achieving fuel economy improvements of at least 20%, largely through the use of sensors and controls.

The program that MTU is working on in partnership with General Motors is titled “Connected and Automated Control for Vehicle Dynamics and Powertrain Operation on a Light-Duty Multi-Mode Plug-in Hybrid Electric Vehicle.”

As for that title: GM has supplied the MTU Advanced Power Systems (APS) Labs with eight Chevrolet Volts. Dr. Jeff Naber, director of APS Labs says that while the technology that they’re developing (they’re in year three of a three-year program) takes advantage of the plug-in hybrid architecture, it is applicable to any vehicle through its advantages may vary.

So how are they getting this ~20%? Largely by using V2X technology.

As Morgan explains, the vehicle communicates, via both DSRC and 4G LTE, to other vehicles, infrastructure (such as traffic signals) and to a cloud where algorithms are running (as they are on the car, as well).

There are different aspects to this. Let’s say the car is programmed to go from point A to point B. One part is to have an eco-route calculated, taking into account things like elevation changes as well as real-time traffic conditions. Naber says that because time has a value, that is taken into account, as well: the system won’t plot some route that might be energy-efficient but time-wasting.

Once that’s set, then the vehicle proceeds. As it is communicating with the infrastructure, given its speed and when a traffic signal is going to change it is possible to adjust the speed so as to safely—and legally--get through the light without having to stop and thereby waste energy. It is worth noting that the system takes into account various parameters including the weight of the vehicle (including passengers and cargo) to provide precise adjustments.

Assuming that there are several vehicles that are equipped with the system, then in cases where there is highway travel, the plan is to have those vehicles, which have adaptive cruise control technology on-board, arrange themselves into a platoon, thereby providing better aero (Morgan cites the lineup of cars during a NASCAR race that are drafting one another). This is another gain for fuel efficiency.

As indicated, there is still the better part of the last year of the program. Naber says he and his colleagues are working with a variety of suppliers, as well as engineering personnel from GM, to develop techniques, algorithms and technologies that will lead to the achievement of the NEXTCAR goals.