How carbon fiber is utilized is as different as the vehicles on which it is used. From full carbon tubs to partial panels to welded steel tube sandwich structures, the only limitation is imagination.
#Carbon #MercedesBenz #McLaren

McLaren’s Monocell carbon fiber tub first used on the MP4 12C, and was the starting point for all McLaren road cars to follow. Aluminum and/or steel was used for the upper structure until the P1 hybrid super car bonded a woven carbon fiber roof section to the tub to create the Monocage.

With the Monocage II, McLaren mates the third iteration of the Monocell to a pre-bonded upper structure with woven sections, mimicking the construction used in the P1. Cost reductions and design targets drove the change in material, giving the 720S sports car thinner A-pillars, larger door openings and more glass area.

TVR tapped Gordon Murray Design for its new lineup, which will be built using GMD's iStream Carbon process. It consists of a spaceframe made up of large-diameter thin-wall tubes bonded to compressed carbon fiber panels that are built around a honeycomb core. Yamaha and GMD have built concepts around the technology (shown), but TVR will be the first into production.

“The Monocage that we launched on the 720S is an evolution of the Monocell concept introduced on the original MP4-12C road car in 2011,” says Adam Thomson, Body Manager, McLaren Automotive (see: adandp.media/articles/the-amazing-mclaren-mp4-12c). Effectively a carbon fiber bathtub that holds both the occupants and acts as the primary vehicle structure, the Monocell (or “Carbon MonoCell,” as it was originally called) is made in a single piece. When asked how McLaren does this, the standard reply is, “Very well, thank you,” an answer very much in keeping with the British company’s tight-lipped nature. However, a rigorous internet search shows that production of the structure is performed by Carbo Tech in Salzburg, Austria, using bi-axial and tri-axial carbon fiber fabric produced by Formax UK Ltd.

Further research shows that when McLaren introduced its revolutionary center-seat, three-passenger F1 supercar in 1992, it reportedly took 3,000 hours to build its woven carbon fiber monocoque. By the time the Mercedes-Benz SLR McLaren hit the market in 2003, McLaren engineers were able to reduce this time to just 500 hours. The time reduction was remarkable, but still far short of what was necessary for McLaren to profitably produce a family of high-performance mid-engine cars. It used the next eight years to whittle this down to just four hours for the MP4-12C.

Part of the time reduction can be put down to process improvements (production time for each chassis type dropped as familiarity with the process increased), but the greatest time savers were simplifying the design of the structure itself and development of an in-house process to model the bending and flexing response of a material that, according to Thomson, “has stiffness in one direction that is not necessarily the same in the orthogonal direction.”

McLaren’s F1, for example, used then-current Formula One technology, and was designed around pre-preg materials and the use of an autoclave. Using this technique, he says, “You can make something as complicated as your mind can imagine the tool being because it is manually broken out of the tool afterward. If it needs 27 pieces that you take out one-by-one, that’s what you do.” However, the cycle time for each tool and autoclave is eight hours, which limits production to a few parts per day.

Says Thomson, “The game changer for us in utilizing a material and its properties is in the use of sheet molding compound.” On the new 720S sports car, the door shut area and visible portions of the structure inside the cockpit are formed using carbon SMC. Its cure time, which takes place in the tool, is just a few minutes. Resin transfer molding (RTM), which has a somewhat longer cure time than carbon SMC, also cures in the tool and is much quicker than the pre-preg/autoclave setup. And though Thomson remains tight-lipped about the actual process, it is thought that McLaren’s Monocell is made up of multiple pieces bonded together into a single unit via RTM.

“With every car we’ve introduced since the 12C,” says Thomson, “we have iteratively improved on the Monocell concept.” When the 650S replaced the 12C, it carried over the previous car’s 75-kg. (165-lb.) Monocell intact. Which meant that, except for the Spider models with their retractable hardtop design, the upper structure consisted of a stamped aluminum windshield surround mated to roof structural elements stamped from boron steel. The less expensive 570S has a revised Monocell tub with lower side sills for improved ingress and egress. And, since cost and cycle time are more critical, steel replaces aluminum for the windshield surround.

However, with the introduction of the P1 hybrid supercar in 2013, the Monocell begat the Monocage; the distinction arising from the use of woven carbon fiber for the complete roof structure, including the integrated snorkel air intake. This was bonded to a modified version of the 12 C/650S Monocell to form a single carbon fiber structure. Even with the addition of carbon fiber frameworks on which to mount the battery pack, electric motor and power electronics, the P1’s monocoque tipped the scales at 90 kg (198 pounds) while meeting required international race sanctioning body loadings and all national crash requirements.

The P1’s structure formed the conceptual basis for the 720S chassis. The 570 S’s Monocell was redesigned to further lower the sill structure while improving both overall strength and weight. Woven carbon fiber is used in the upper structure, which is made up of a few individual pieces and pre-bonded to, as Thomson puts it, “form the upper portion of the Easter egg.” Replacing the metallic elements with carbon fiber allowed the engineers to make slimmer A-pillars, larger door openings, and design dihedral doors that open at an 80-degree angle in order to decrease the space needed to fully open the doors. As with the P1, this carbon fiber structure is bonded to the revised Monocell to create the Monocage II.

With the introduction of the Monocage II, McLaren not only has the platform for the 720S and any Super Series variants it wants to build from it, but also the base upon which it can build the next Ultimate Series vehicle. Whether a full-electric hypercar or a high-tech hybrid, the P1 replacement will follow what has become standard practice for McLaren Automotive, bolting extruded and cast aluminum structures carrying the front and rear suspensions, powertrain and crash structures to steel or alloy inserts molded into the structure. Further derivatives will replace the less-expensive Sport Series, and introduce new models. As a result, McLaren has announced it will open its new Composites Technology Center in the shadow of the Advanced Manufacturing Research Center at England’s University of Sheffield. It will be responsible for the development and production of the next generation Monocell and Monocage that will enter full production in 2020. “Our goal is to produce a core tub[prior to finishing] in 30 to 40 minutes,” says Thomson, which should allow McLaren to significantly increase production volume while further decreasing cost. And though Sheffield is nearly 200 miles from McLaren’s base in Woking, it is much closer to England than Austria, especially in a post-Brexit world.

The R8 sports car’s Audi Space Frame combines aluminum and carbon fiber, but in a much different mix than at McLaren. The 200-kg (441-lb.) structure uses resin transfer molding (RTM) to produce the carbon fiber cabin rear wall, center tunnel and three-piece B-pillars. In the rear wall crossmember, the fibers are aligned in one direction for maximum transverse strength, with up to 14 layers that form a 5-mm (0.2-inch) thick sheet. The layers used in the B-pillars, on the other hand, are aligned in multiple directions in order to handle both transverse and longitudinal loads. Unlike the rear wall, which has a tensile strength of 3,950 MPa, the tensile strength of the B-pillars is 900 MPa.
The R8’s front and rear modules are made entirely of aluminum, and the A-pillar nodes, like the other cast nodes in the R8 ASF, have a complex interior geometry that helps to absorb large forces without adversely affecting styling freedom. They join key members of the front structure and occupant cell together, and have a tensile strength of 350 MPa. The bulk of the front and rear modules is formed by a combination of extrusions and cast nodes. Aluminum structural struts stiffen the rear body, while 1.0-kg. (2.2-pounds) oval sections are used to form the upper structure. In addition, the upright section between the rear strut mount and the axle chassis joint varies in wall thickness from 1.5 mm (0.06 inch) to 6.2 mm (0.24 inch) to save 1.3 kg. (2.9 pounds) of weight, while aluminum sheet is used for the floor of the luggage compartment where it acts as a shear plane to improve crash performance.
Over at TVR, Gordon Murray Design (see: adandp.media/articles/mclaren's-pied-piper) is the engineering might behind the brand’s resurrection, where its iStream production process will be used. At the center of every iStream project is an iFrame structure, a lightweight, low-cost architecture built up from laser-cut and profiled large-diameter, thin-wall tubing. These tubes are welded together to create a spaceframe that joins all of the mountings for the seatbelts, seats, suspension, engine and transmission, door hinges, etc., and this structure is then coated with an organic corrosion-resistant material.            Normally, low-cost composite panels—iPanels—are bonded to the structure. Made up of woven, unidirectional random mat glass or natural fibers sprayed with a low-cost, quick-cure resin, the panels are compressed and mated to a honeycomb core. However, iStream Carbon replaces the glass fibers with carbon fibers while retaining the honeycomb core. GMD claims the production system to make the carbon fiber panels is fully mechanized, has a cycle time of just 100 seconds, a price point that will allow it to be used in affordable vehicles, can support production of 1,000 to 350,000 units per year, and requires a physical footprint up to 75 percent smaller than that of a typical automotive assembly plant. 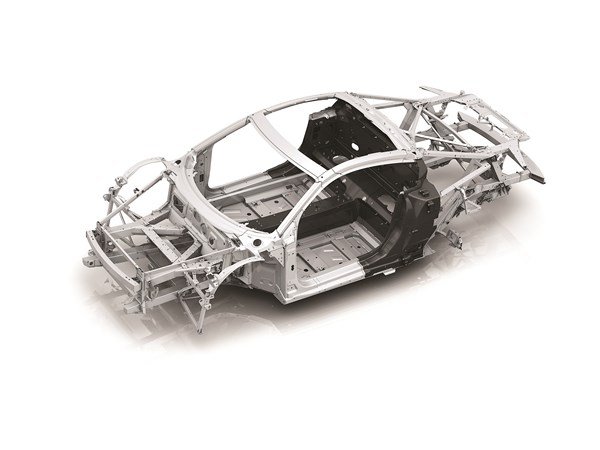 Audi’s R8 combines an aluminum spaceframe with a center tunnel, back wall and B-pillars made of carbon fiber. This lightweight structure weighs 200 kg., making it just over twice as heavy as McLaren’s Monocage II.