Concept cars always have features that are not part of existing production vehicles (which is why they are concepts and not things like “production-intent vehicles”), but which, quite possibly, can make it into production. Here’s one that fits that description:

Toyota Boshoku Corp., an interior components supplier to guess who, tapped materials supplier Covestro to work with it in developing a new polyurethane composite material for use in an electric concept car developed by Toyota, the LQ. 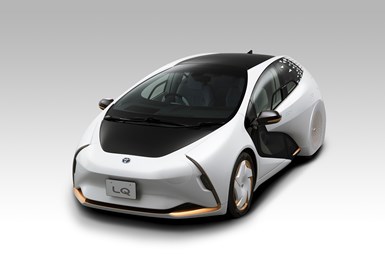 What is interesting about this material is that it is a two-component polyurethane (Baypreg F NF) that is reinforced with kenaf, a plant fiber that Toyota Boshoku has experience working with.

The resulting kenaf fiber-reinforced polyurethane foam has an area density of less than 1 kg/m2 and high strength. The door trim that is made with the material is 30% lighter than conventional materials used for the application.

Mass reduction is particularly important in electric vehicles as less mass to move means the opportunity for longer range. 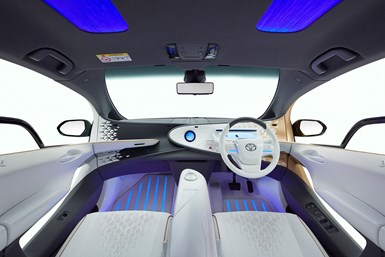 Door trim components in the LQ are made with a kenaf-reinforced polyurethane foam developed by Toyota Boshoku and Covestro. (Image: Toyota/Covestro)

In addition to which, the use of the cost-effective, natural fibers is an advantage in terms of sustainable production.