The New Fiat 500—an all-new (yes, implied by the name, but. . .), all-electric version of the diminutive Italian car—has achieved a Red Dot Award in the “Design Concept” category. 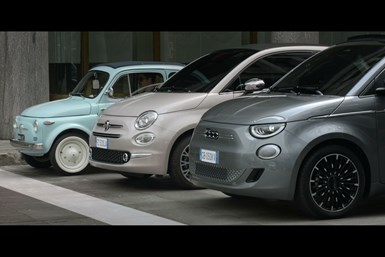 The three generations of the Fiat 500, with the latest in the front. (Images: Fiat)

Klaus Busse, head of EMEA FCA Design, who headed the team that developed the car (with other team members including Laura Brunet, Stefano Danna, Dr. Alberto Dilillo, Michele Longo, Danilo Tosetti), said of the car and the achievement, “Our aim with the Fiat New 500 was to create an electric car with a soul, whose design strongly features the Italian approach to style and the feeling that can be drawn from the sculptural trend of the New 500, in its ‘eyes’—the headlights—and in its interior. We wanted to create a unique product, as a statement of the Italian spirt, of how Italy as a nation and Fiat as a brand can create today. Receiving the Red Dot Award is a great honor for the entire team who have worked on the New 500 project.”

Busse moved to FCA Europe in October 2015, having been in the U.S. for the 10 years before that. . .having come to the U.S. in July 2005, as part of the then-DaimlerChrysler Corporation. Daimler left. Busse, who was born in Germany, didn’t. He is one of the most thoughtful designers I’ve had the opportunity to get to know, and when he was in the U.S. he seems so acculturated that were it not for his slightly accented English, he could have passed for someone from SoCal. Clearly, Busse melds into where he works rather well, given his comments about the “Italian approach.”

Klaus Busse: a man who has been involved in the design of everything from the S-Class to the Ram pickup to the New 500.

For those interested in the electric aspects of the New 500: it has a 42-kWh lithium-ion battery pack that provides a range of 320 km in the WLTP driving cycle (199 miles—though realize the WLTP cycle is much different than the EPA cycle). The New 500 is powered by an 87-kW motor and has a top speed—electronically limited—of 150 km/h (93 mph). Using an 85-kW fast charger the New 500 can get enough energy to drive 50 km (31 miles) in five minutes. The batteries will change on a fast charge to 80% in 35 minutes.

And for those who are in the U.S. and who are interested in the New 500: It is not coming to the U.S.