New Steels Explained: What You Need to Know About the Ongoing Developments

A range of new steels is being developed to assist body engineers create better trucks, cars and SUVs. Here’s what they can do for everyone from safety engineers to designers
#Acura #Ford #GeneralMotors

John Catterall has spent a long time working with materials. His career includes early stints at Austin Rover and Leyland (yes, he began in the UK, where he received degrees in Mechanical and Production Automotive Engineering from Bolton Technical College and Leyland Technical College). His most recent position in the auto industry was at General Motors, where he spent 18 years and where he led a global innovation team focused on developing body systems. 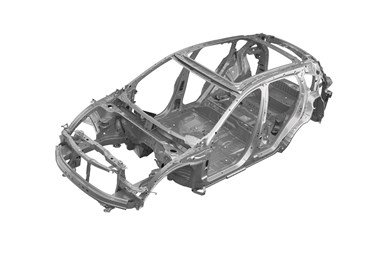 An example of an advanced architecture with steel: the third generation Acura RDX features the world’s first two-piece (there are an inner and an outer) ultra-high-strength steel front door ring. There is also a double-ring rear frame structure. High-strength steels are used for more than 50 percent of the overall structure. (Image: Acura)

He then became the executive director of the Auto/Steel Partnership (A/SP), a consortium that includes the Steel Market Development Institute’s Automotive Application’s Council, FCA US, Ford and General Motors; the organization works develop processes and practices that can be used in the auto industry to build vehicles that are safe and cost effective. On March 1, 2020, Catterall was named the vice president, Automotive Program, at the American Iron and Steel Institute.

And he adds another aspect to that work to achieve efficiency: “But I need have a business case for making this product, so I have to add cost effectiveness as part of efficiency.”

Catterall cites a slogan that is used at GM: “The right material in the right place for the right reason.”

Not everything in auto is going to be made out of steel. John Catterall, an auto industry vet in body engineering, who is now the vice president, Automotive Program, at the American Iron and Steel Institute. (Image: AISI)

For those who aren’t metallurgists or deeply involved in the chemistries and intricacies of steel, there can be a bit of confusion vis-à-vis materials that are “high-strength,” “advanced high-strength” and “ultra-high strength,” as these are designations that are related to the strength of the materials, as you can see in the accompanying chart. Unless you are deeply engaged, knowing things about the microstructural differences between an HSS and an AHSS or an UHSS probably isn’t going to be all that helpful. Knowing things about what the strengths and ductilities of the materials are more germane to producing automotive components, be they structural or body panels.

And there is still a category of steel that has great use in automotive but doesn’t get as much attention as its more exotic-sounding ferrous mates: mild steel.

Catterall says, “It is something of an oxymoron when you say ‘mild steel’ because it is still a strong material.” He says that it tends to be used for larger body panels—roofs, body sides—because it has the strength that allows the material to be of a thin gauge yet still provide dent-resistance: “When you push on it you don’t want marks.”

Mild steels are also used for floor panels, where there can be ribs and other shapes put in so as to provide more stiffness.

The Next Generation of Steels

That said, Catterall says that the material of interest to know about now is “3rd-generation AHSS.”

These materials have a high tensile strength but there is something that is rather important: they also have good formability. Whereas there has been a trend toward the use of hot-stamping in order to form UHSS components (materials >1,000 MPa), the 3rd gen materials can be formed with cold stamping.

“Back when I was working on dual-phase steels at GM,” Catterall recalls, “it was hard to form some complex parts out of some of those materials, so we had to go to hot stamping.” Parts like B-pillars, which are narrow and deep.

But he says that parts like that—parts that are required to help create a safe occupant structure while being light—can be made with the 3rd gen steels.

Although it might seem that given a choice between hot and cold stamping that one would go with the latter. After all, the material doesn’t have to be heated before forming and the dies don’t have to have channels for cooling water to run through.

Catterall says, however, “It is not a slam-dunk decision. You have to run the business case.”

That is, he points out that it may be necessary for the stamper to have a bigger press to cold stamp the part, which could be a cost factor. “OEMs will make decisions based on their infrastructure and how complex the part is.”

This is the so-called “banana chart,” which shows the steels out there right now and those that are being developed (e.g., the Gen Three steels). Some materials score high in strength but give it up in the area of ductility. A goal is to get materials that are both strong and formable. (Image: AISI)

One thing that has happened over the past few years is that the number of companies with hot-stamping capacity has increased. This has led to a case, Catterall explains, where there is some commoditization of the process: “If there are more suppliers doing it and getting more efficient at hot-tamping, then the cost of hot-stamping will be coming down, in general.”

So one of the places where cold stamping of the 3rd gen steels is likely to have initial traction is in lower-volume applications, particularly for structural parts that are involved in dealing with crash energy, from front and rear rails to roof rails and the like. Given the lower volumes, it may be that the business case pencils such that putting in a hot-stamping line isn’t as cost effective.

But whether it is a 3rd gen material or another of the higher-strength steels that have been developed, it isn’t just about stamping.

For example, Catterall points out, “As you get to the higher-grade materials, welding does have to be done differently. The OEMs have to adopt new welding schedules and go through new welding qualifications.”

He says that it isn’t an issue with the welding per se—“So far they weld well”—just that what works with previous materials may not be sufficient. “When you put a coating on 3rd gen AHSS there are some things you have to do slightly differently.”

So one of the activities at the Auto/Steel Partnership is developing the welding schedules that are suitable for the steels.

And Catterall also notes, “It is not just welding these materials to themselves, but to other grades of steel, as well. 3rd gen AHSS to an UHSS martensite will be different than a mild steel or a dual-phase steel. You’ve got to develop the schedules to combine these new materials in a future design.”

But he points out that this is a learning curve that has been the case with the introduction of other steels, so it isn’t something that hasn’t occurred many times.

Of course, when it comes to body engineering of new vehicles nowadays, whereas steel was once, for many, many years, the default choice, there is now a greater range of materials that are considered and deployed.

It is a “mixed-materials” world.

Oddly enough, Catterall thinks that this is not necessarily a bad thing. For one thing, if you look back to the 2015 Ford F-150, with the all-aluminum body structure, it might have seemed as though there were going to be serious problems for the steel industry, because if the largest-selling vehicle in the U.S. (and let’s face it: a physically large vehicle) was going to go all-aluminum, wouldn’t there be the possibility that other OEMs would follow?

As things have turned out, however, is that while there is an increase in the amount of aluminum for things like swing closures and liftgates (and aluminum hoods have long been used in order to provide better mass balance for a vehicle: the engine block is heavy and the cargo area or truck is often empty, so taking out mass in the front is important), Catterall says there is steel being brought back in to structures for things like roof rails and B-pillars.

That said, he points out that there is a challenge that the mixed-material approach presents, which is joining one type of material to another. This has led to research being performed at the Auto/Steel Partnership and elsewhere to develop the methodologies and testing procedures to assure that the materials are appropriately assembled.

Still, he notes, “It is and always will be a challenge to join different materials to each other.”

Although there are more body panels being made with aluminum or even composites, Catterall says that the new steels can provide designers with an advantage compared to the alternatives. He explains that should designers want sharp character lines on body sides, achieving them with steel is easier than alternatives. Putting multiple shapes and sharp, crisp lines into aluminum sheet, he says, is difficult. And in the case of composites and character lines, realize that what a line is is a radii, and while there can be quite thin steel used for a body panel, the thickness of the composite—both the fiber material and the resin matrix—can be such that the edge of the line is somewhat washed out.

As there is a move toward more electric vehicles in the fleet, Catterall says that steel can play an important role: “The in-floor battery packs need to be very well protected. They can’t undergo any compression during a collision or even when going over a pothole. The containers must be quite rigid. So we’re going to see a lot of UHSS and AHSS steel in these battery enclosures and box structures,” he anticipates.

One of the things that is often cited about electric vehicles is that they must be lightweight in order to maximize the range that can be achieved: more mass to be moved puts more strain on the battery, so reduced mass can mean better performance.

Catterall says that the electric vehicle developers are going to have to take a close look at the money that they’re spending to reduce weight versus the payback in terms of performance. That is, he suggests that the cost to achieve mass reduction may be greater than the performance return that they could get if they were to use more batteries, especially if battery costs continue to decline: “Making the battery pack slightly larger might be less expensive than paying a premium to take mass out of a vehicle.”

Which is to say, in effect, that using a less costly material (say, oh, steel) might be more beneficial to the cost and performance of the entire system.

“The steel industry, and the auto industry in general, have a lot of work to do to create these efficient architectures,” Catterall says, in what might be the understatement of the year. The challenge is enormous, but to listen to Catterall makes you believe that they’re going to get it done.