Nikola’s Trevor Milton says this is the “single largest order” of refuse trucks in history—and he just doesn’t mean EV trucks, either
#Nikola

Jon Vander Ark, president of Republic Services, the second-largest waste collection company in the U.S., puts it quite simply: “This is where this industry is going.”

And what he is referring to is that it is going electric. So Republic, which purchases about 20% of all the refuse trucks purchased by the industry each year, has been working with Nikola Corporation on the development of electric waste trucks that use the Nikola Class 8 Tre platform, and has announced the order of 2,500 trucks. “This is a binding agreement,” Vander Ark says. “This is a commitment.” (Yes, there are contractual marks that have to be hit over time, but this is something the company is serious about sourcing.) While there will be some vehicles shipped to Republic in 2022, the full production deliveries are to commence in 2023.

Engineering the 2021 Ford F-150
The Software Revolution Is Here It’s a great time to be a software engineer in the auto industry. 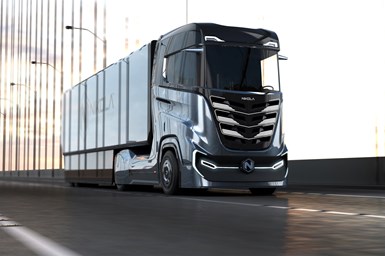 The Nikola Tre will be reconfigured for refuse collection for the 2,500-unit order from Republic Services. (Images: Nikola)

According to Trevor Milton, Nikola founder and executive chairman, Nikola will be responsible for the entire vehicle—the usual approach in the build of these trucks is that there are multiple entities involved, such as one company doing the chassis and powertrain and another doing the body—and as such they are working on economies of scale which should bring the price of each of the trucks to $500,000 or less. Meaning that this is a contract that is valued at over $1-billion. These trucks are being purchased, not leased.

Milton says that the truck has 720 kWh on board. A truck used for residential services will handle approximately 1,200 trash cans per day and travel about 150 miles. While the powertrain will provide up to 2,000 hp, that will be software limited to about 1,000 hp. He says that there is a smart algorithm being used that will provide more power if needed: He uses the example of a fully loaded truck having to go up a hill in San Francisco. (Yes, Republic will be deploying trucks in California, Vander Ark says.)

Milton acknowledges that the refuse industry “is the harshest industry out there.”

Which leads to a question of maintenance. He suggests that the maintenance for an electric trash hauling truck is simpler than one powered by diesel or CNG. For one thing, there is a single-speed e-axle, not a complicated transmission and gears. The battery pack consists of nine 800-volt DC batteries; should one go bad, it can be replaced and the battery management system will automatically recalibrate the system.

Vander Ark agrees, noting that the reduced number of moving parts simplifies things. He also points out that about 90% of Republic Services’ maintenance is performed in-house.

The Nikola Tre is being produced by IVECO in a plant in Ulm, Germany. While the primary use will be for over-the-road trucking applications—Milton says there could be some 35,000 per year—and the cab was designed for such use, there is additional design work going on so that the cab will meet the requirements for Republic’s drivers.