When Carlos Ghosn took over as head of Nissan, one of his first priorities was to restructure the company's Product Planning department. As a result, the company is able to move more quickly, create more variants from common pieces, and create vehicles better suited to the markets in which they are sold. Vehicles like the 2004 Nissan Maxima and Infiniti FX45 are just the first examples of how this strategy will play out.
#Infiniti #Nissan #Renault 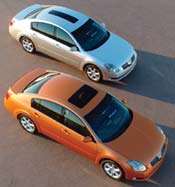 The sixth generation Maxima is built off a modified Altima platform and sold only in North America. Both are built side-by-side at Nissan's Smyrna, TN, plant, but the sporty Maxima SE has softer dampers (2.8 kg/mm vs. 3.0 kg/mm) than its Altima counterpart. The fixed Skyview panel-a tinted glass band down the center of the roof-is fixed and could keep sales of the optional powered sunroof to a minimum.

Models with the Elite Package substitute two rear seats and a large center console for the standard bench.

Under the so-called "bionic cheetah" bodywork sits a lightly modified G35 platform powered by a 315-hp. 4.5-liter V8, and sitting on 20-in. wheels. Despite its all-wheel-drive and raised ride height, the FX45 is more sport wagon than sport utility. The hood is aluminum and, like its Nissan Murano cousin, the rear hatch has a steel frame covered in composite panels. Both are designed to keep the center of gravity lower than on any other premium SUV.

“It wasn’t easy, and it took time,” is the succinct answer from Jack Collins, vice president, Product Planning, Nissan North America when asked how Nissan has been transformed from a company on the critical list to one that’s turning out an array of important products. The turnaround began after Nissan president and CEO Carlos Ghosn arrived from Renault, and set about rationalizing Nissan’s vehicle lineup. Despite reports to the contrary, Collins says Ghosn also was careful never to demand that the company build nothing but “world cars,” something Nissan had been doing.

“One of the first things Product Planning did,” says Collins, “was define the brand identities of both Nissan and Infiniti, with the understanding that Nissan–which is the larger volume brand–would be the first to be revitalized.” It didn’t take long, Collins claims, for the product planning groups to differentiate the brands by powertrain layout, with Nissan producing predominately front-drive cars, and Infiniti rear-drive vehicles. This would move the brands in distinct directions, and make Infiniti a more credible player in the luxury segment, despite the potential savings that could be gained from building the Infiniti models off the Nissan platforms.

“This decision on Product Planning’s part paralleled a decision to move away from ‘world’ platforms that could never be suited to the needs of each market,” says Collins. And though much of the engineering would still be done in Japan, the package would be laid out in the country with the strongest sales for a particular vehicle family. This is why the current Altima is an “American” mid-size car suited to U.S. driving conditions, not a Japanese-scale car meant for the stop-and-go of a Tokyo rush hour. Even though these changes made sense, there was no guarantee Ghosn would approve of what, for Nissan, would be a radical new direction. “When the plans were presented to him,” says Collins, “his response was to-the-point: ‘Don’t talk about it, do it.’”

Heading in a new direction is not always easy, for there is safety in the familiar and danger in the unknown. “Bringing this about meant a lot of work was being done around the world,” says Collins, “but for the first time we were working with clear guideposts that had been agreed upon by everyone beforehand.” This new process fostered an openness to change, and was tempered by the need to get cross-functional agreement before a program moved forward. Debate increased exponentially, but the overall decision-making process moved ahead more quickly than ever before. Plus, the need to revisit decisions was cut dramatically.

Approximately 30 people from Nissan’s global Product Planning team studied and proposed these changes to the company’s Executive Committee. Concurrent with the reorganization of the global product plan came a restructuring of Product Planning itself. “We chose the best practices from both Renault and Nissan,” says Collins, “and now it’s not unusual for me to see Mr. Ghosn at least once a month in a Product Planning meeting.” Those meetings, say Nissan insiders, are not top-down mandates, but detailed presentations of the vehicle, the buyer, the costs involved, and how the goal can be reached. “Ghosn expects you to present your decision, not ask him to make it for you,” says a Nissan engineer. “And you’d better be prepared to defend your assumptions with strong numbers. He understands the need for passion in the process and the vehicles, but he doesn’t allow it to overshadow the bottom line.”

This explains why the 2004 Maxima, originally planned around a unique platform, was added to the Altima family (Altima, Quest, Murano), and had a pronounced effect on their structure. In its initial iteration, the Altima was to have a twist-beam rear axle, and be based around a four-cylinder engine, with the V6 as a lower volume option. Once the Maxima joined the party, a number of welcome changes took place. The rear suspension became a fully independent unit designed by the same engineer responsible for the rear-drive Nissan Skyline GT-R’s multi-link rear suspension. Greater emphasis was placed on cost-effectively creating a structure that could support a near-luxury sporting sedan. The V6 moved up in importance, but efforts were made to keep vehicle weight low so as not to hinder the performance of four-cylinder models.

The transformation of the Altima platform was so complete that, when asked what Nissan changed under the skin to create the 2004 Maxima, Vehicle Evaluation Group senior manager Yoshitaka “Yosh” Iijima answered: “Not much.” His only reservation was that it took 22 months to develop the Maxima, about seven more than he thinks should be necessary for a new vehicle built on a carryover platform. That time, he says, could have been spent designing an all-wheel-drive Maxima with twin light-pressure turbos. “With the new [product development] process we can produce models that wouldn’t have been possible the old way,” he says.

The same thought processes extended to Infiniti, and are best personified by the FX45. Based on the rear-drive Infiniti G35/Nissan 350 Z FM (Front Midship) platform, the FX45 borrows its all-wheel-drive system from the Nissan Skyline GT-R and G35-based Nissan Stagea wagon, and the 4.5-liter V8 from Infiniti’s M45/Q45. Subtle platform changes (thicker front side members, inner sills and rear inner fenders; reinforced front strut housings) handle the forces transferred to the all-aluminum suspension by the 20-in wheels. In return, it gives Nissan and Infiniti a platform capable of handling the dynamic abilities of the next generation Nissan Skyline GT-R, and the basics for a SUV crossover “coupe.”

“There’s still a lot to do,” says Collins about Nissan’s product lineup. And that simple statement is enough to keep Nissan’s competition up at night.