Nissan Has A Clever Approach to the Frontier

When you don’t have a new product, there are some things to do to the existing to make it appealing—but that certainly isn’t a long-term solution.
#GMC #oem #Jeep

The midsize pickup segment is growing to a large-size segment in the market. In the first quarter, Chevrolet sold 33,494 Colorados, GMC sold 6,954 Canyons, Ford’s new Ranger had sales of 9,421 units, and the long-leading Toyota Tacoma had sales of 58,183 units. While the Jeep Gladiator wasn’t available in Q1 and will be but a blip for Q2, all signs point to that pickup picking up some respectable sales numbers as the year continues.

At this point some of you might be noting that there is one midsize yet to be mentioned, the Nissan Frontier. It had sales of 20,221 in the first quarter. Which is comparatively low (Canyon sales notwithstanding).

It is worth noting that compared to the other vehicles, the Frontier is rather, well, old, given that the vehicle went into production in the fall of 2004.

So what do you do when you have new competitors like the Gladiator and longer-standing ones like the Colorado and the Tacoma, both of which are emphasizing their non-street-cred, as in off-road/adventure capabilities?

You turn to the aftermarket and emphasize economy. 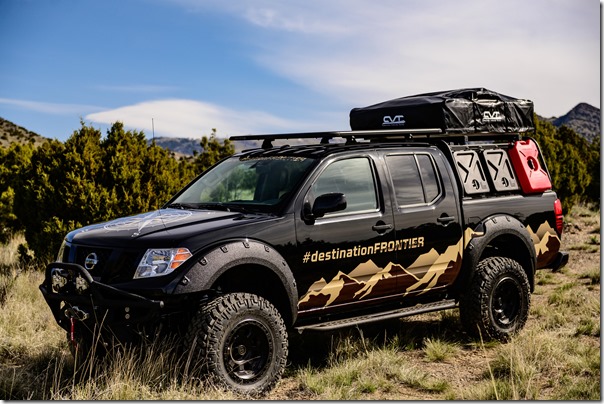 At least that’s what Nissan has done with a Frontier that it has kitted out that it is calling the “Destination Frontier,” a one-off that can be used as a template for those who are looking to get something rugged without a hefty sticker. As Tiago Castro, director, Light Commercial Vehicles, Nissan North America, put it, "We believe Destination Frontier will spark the imagination of customers who would like to get into overlanding but don't want to spend a fortune in the process."

Given the competitive nature of the midsize pickup segment, it is clear that an approach like this is but a Band-Aid. Additional full-on product development is undoubtedly needed, especially as FCA CEO Mike Manley has stated that they’re going to be getting back into the segment, too.