“Calling All TITANS” is a marketing initiative that Nissan created last fall to organize an affinity group among owners of the Titan pickup. As Jeremy Tucker, vice president, Marketing Communications and Media, Nissan North America, put it when announcing the program, "We have seen that Titan customers are the kind of people who want to get the job done and leave their world better than they found it. Be it conservation of the outdoors, contributions to local charities or simple acts of kindness, there is a natural desire among pickup truck owners to take action when help is needed." 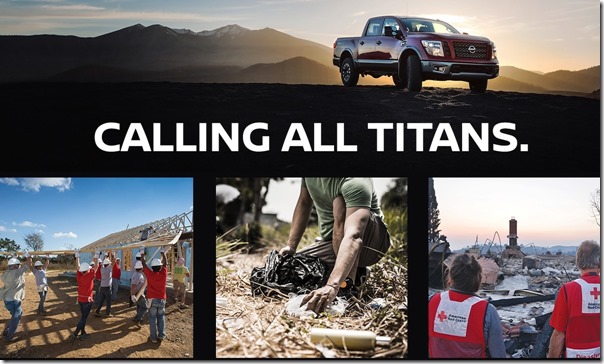 And so they identified Habitat for Humanity, the American Red Cross, and the National Park Foundation as organizations that they would support, with monetary donations (as in a total $1-million), as well as efforts to bring the Titan owners together to address specific needs.

One of the consequences of the recent partial government shutdown was a trashing of several national parks, with, for example, a former superintendent of Joshua Tree National Park saying that the damage caused there could take as many as 300 years to recover from.

As Teddy Roosevelt put it of the parks, "We have fallen heirs to the most glorious heritage a people ever received, and each one must do his part if we wish to show that the nation is worthy of its good fortune."

So Nissan is making a call out to its Calling All TITANs members and other interested parties: From now until February 8 it will be matching any National Park Foundation donation, 2-for-1, up to a total of $200,000.

Even if you don’t drive a Titan, donations at nationalparks.org/titan would undoubtedly be appreciated.

The 34 days took its toll. This will help with the recovery.