While we’ve often pointed out in this space that one of the challenges of moving toward electric vehicles (EVs)—as in full, battery-electric vehicles, not “electrified,” which can be a 48-volt system or a hybrid or some variation there of—is that there needs to be the creation of an infrastructure.
#BMW #Chevrolet #Autodata

While we’ve often pointed out in this space that one of the challenges of moving toward electric vehicles (EVs)—as in full, battery-electric vehicles, not “electrified,” which can be a 48-volt system or a hybrid or some variation thereof—is that there needs to be the creation of an infrastructure.

Another challenge is that there needs to be full-on production volumes for the EVs because that is one of the ways that prices will come down—the whole economies of scale phenomenon. Let’s face it: since there are still comparatively small volumes of vehicles being produced, costs (especially of batteries) are high.

Consider. According to Autodata, through November, 2017 sales of EVs look like this:

To put that number into context: during the same 11-month period, Dodge sold 81,521 Chargers. 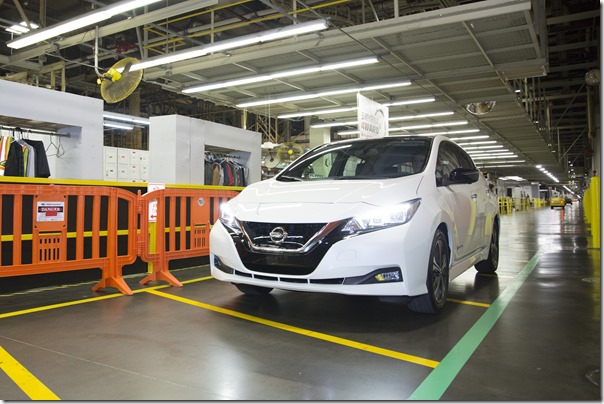 Be that as it may, it is notable that today the all-new 2018 Nisan Leaf went into production at the Smyrna Vehicle Assembly Plant in Smyrna, Tennessee.

A couple things to note about this. First of all, now that the Smyrna plant, which has been producing vehicles since 1983, is an important one for Nissan. There they build the Altima, Maxima, Pathfinder, Rogue, Infiniti QX60 and the Leaf. The facility has an annual production capacity of 640,000 vehicles. They’ve built more than 12-million units there since they started.

They’ve been building Leafs in Smyrna since 2013.

Second, this is the second-generation Leaf. The “all new” means that. What will undoubtedly provide additional traction for the car in the market is that it will have a range of about 150 miles on a charge.

While it might seem that this range increase is accomplished by sticking in a bigger battery, the lithium-ion battery in the new vehicle is the same size as that of its predecessors. (How did they do this? They reengineered the individual cell structures within the battery, thereby achieving a 67 percent increase in energy density compared with the original 2010 Leaf.)

Nissan is solidly behind the Leaf on a global basis, as well, with production of the vehicle also being performed at the Nissan Oppama Plant in Yokosuka, Japan, and Nissan Motor Manufacturing Ltd. in Sunderland, England.